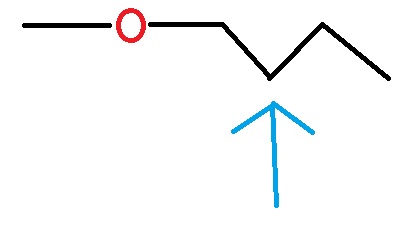 What does the 1H NMR spectroscopy coupling pattern look like for the hydrogen attached to the carbon that the blue arrow is pointing to? There is a $\ce{CH2}$ attached to ether side of the carbon, but each of those carbons is in a different chemical environment from the other. Does that mean that it is a doublet of doublets? Or just a doublet?

The two $\ce{CH2}$ groups are, as you mentioned, in chemically different environments. Thus, each one will couple separately. But within each of the two groups, there are two protons. So you will not get a doublet of doublets, but a triplet of triplets.

Note that for each $\ce{CH2}$ group the hydrogens are chemically equivalent but not magnetically. Therefore, if you include a chiral environment, the pattern will further complexify itself into a higher-order signal that cannot easily be analysed. But since you’re probably measuring in chloroform you need not worry — there is no chiral information present and the couplings will be degenerate.

By the way, it can be assumed that both coupling constants to the two different $\ce{CH2}$ groups be reasonably similar that the overall pattern looks like a quintet without actually being one.

1
Coupling patter for a methyl-butyl ether

34
Splitting of multiplets in ¹H NMR spectra?
6
How to assign the signals in the H-NMR of Aspirin?
1
Spins spin coupling on proton NMR for an aldehyde?
5
Carbon-13 NMR for chloroform
7
How can multiplets in para-disubstituted benzene rings be described?
4
NMR splitting of protons in a ring
0
Coupling in C-NMR