I need some help in a electrophilic substitution reaction. 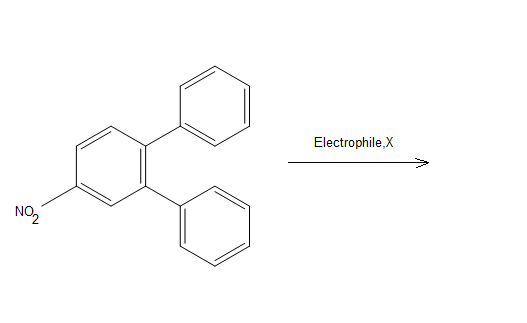 What will be the major product formed in this reaction and why?

I know that (1) Activator wins over deactivator. (2) A powerful wins over a weak activator. (3) When a substituent possesses a lone pair, it it usually extends the product determining influence. (4) Steric factor always plays a key role.

I no longer am a practicing chemist, so I have no access to a structure drawing program; I'll do my best with words:

Accept the initial premise that the NO2 is strongly deactivating so only the 'end' rings will be attacked. As we know o,p- substituion have functionalyl equivalent resonance forms, so we only have to consider 4 possible products: p-, m-substitutuion on the 3-ring and similar on the 4-ring.

Thus the product is likely p-substitution on the 3-ring.

Advanced: The resonance for arguments require all three structures be coplanar. This is not the case; biphenyls have some torsion and twisting because o-hydrogens bump. However, there is still enough 'flatness' and orbital overlap to make some use of the resonance arguments presented above, albeit the magnitude of better and worse are smaller than they would be for more classical EAS problems.