I am trying to calculate the amount of a specific compressed gas that will fit in an air tank of specific displacement, at a specific pressure. This is in reference to compressed air guns.

My question is: What amount of specific gas will fit in an air tank of specific displacement when filled at a specific pressure? (Please provide equation along with an explanation)

I am having trouble coming up with the proper equation to use with the given inputs. I have tried the Ideal Gas Law, Boyle's Law, and the Combined Gas Law. I have no way to verify if the answer I am getting is correct because I'm not sure if I'm using the correct equation.

Note: this is not homework. I am a PHP developer. This is functionality I am implementing for a client's website.

"Quick and Dirty" for gases other than carbon dioxide

You're trying to figure out what volume of gas as STP (standard temperature and pressure) would fill a 122 cc tank at 3000 psi. From ideal gas laws:

but since nRT is constant

I lifted the following figure from this webpage. In basically shows that for a given temperature and amount of gas (number of moles) then the product of pressure and volume, PV, ought to be a constant which isn't observed with "real" gases. The lines show the real behavior and the data points estimates from the Van der Waals equations. The gist here that for most normal gases at 3000 psi (200 atmospheres), you'll only be off by about 20%.

T must be an absolute temperature. Typically in science the Kelvin scale is used.

P is conveniently converted to atmospheres where 1 atmosphere = 14 psi.

a,b are looked up in tables of gas constants

(1) To calculate the number of moles of gas at high pressure, you solve the following cubic equation for $n$. (Knowing $P, V, T, a,$ and $b$). At high pressure (hundreds of atmospheres), and well above the critical temperature there will only be one root for $n$ for all the gases listed except carbon dioxide.

(2) To calculate the volume of gas at room temperature and pressure, you solve the following cubic equation for volume, V, using $n$ from step 1. (Knowing $P, n, T, a$, and $b$). At room temperatures and pressure there will only be one root for $V$ for all gases including carbon dioxide.

The overall idea is that the liquid carbon dioxide expands to a gas in an airgun. This creates a relatively stable pressure as the airgun is shot. (You do have to allow the carbon dioxide reservoir to warm back to ambient temperature since vaporizing the liquid to a gas cools the reservoir.)

There are two other considerations here. First above the critical point 304.18 K (31.03 °C, 89 °F) and 72.8 atmospheres, carbon dioxide exists as a supercritical fluid. Second a carbon dioxide tank is never filled completely full of liquid. There is always some gas headspace, hence the 85% fill. Carbon dioxide tanks have been documented to explode in a hot car on a summer day for example. 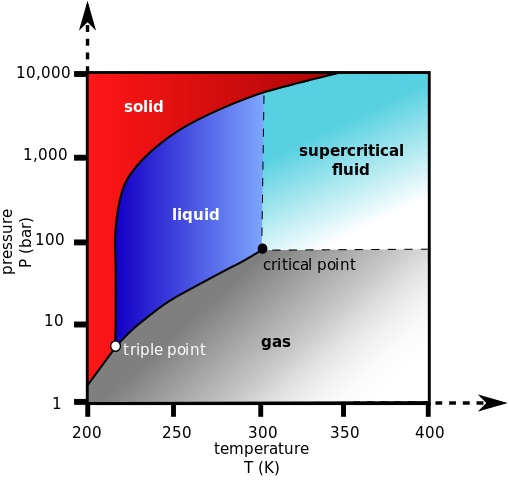 You may not be using absolute temperatures in your calculations. It honestly should matter as all of them stem from the Ideal gas law: $$PV = nRT \Rightarrow \frac{P_1V_1}{n_1T_1} = R = \frac{P_2V_2}{n_2T_2}$$ Where $P$ is pressure, $V$ is volume, $n$ is the number of moles, $R$ is the ideal gas constant, and $T$ is the absolute temperature. Boyle's, Charles, Gay Lussac's, and the combined gas Laws assume that the same number of moles (molecules) are used for each initial and final condition ($n_1 = n_2$).

The ideal gas law is for ideal gases which gives values close enough to most real gases. If your customer would like to be more accurate though there is the Van Der Waals equation: $$P = \frac{nRT}{V-nb} - \frac{n^2a}{V^2}$$ Where $a$ and $b$ are constants specific to the gas. But again your most likely malfunction is using Celsius temperatrue for $T$ in stead of Kelvin temperatue ($T_\mathrm K = T_\mathrm C+273.15$)

Not the answer you're looking for? Browse other questions tagged gas-laws pressure or ask your own question.