I am confused about this that why radioactive elements emits alpha beta and gamma rays WHILE other elements can't do so.

The stability of nuclei is really a sophisticated topic in theoretical quantum mechanics. But there is a simple way to think about what is happening that doesn't get too intense with the quantum mechanical theory.

Nuclei are made from two particles: protons and neutrons. But protons are positively charged and repel each other. The electromagnetic force is very strong and therefore this force is very large. So the first mystery is why all nuclei don't just fly apart.

The reason they don't is that there are two very short-range but very strong forces that bind the nucleus together: the strong and weak nuclear forces. Without getting into mind-bending topics in theoretical physics we can understand something about their net effect like this.

The interaction of the electromagnetic force and the two nuclear forces has some structure (it's quantum stuff, just accept it). Some combinations of protons and neutrons are more stable than others. Each combination has an energy level and some combinations have lower energy than others. Nuclei with even numbers of protons and neutrons are more stable than odd-odd combinations and nuclei with wildly unbalanced neutron to proton ratios are less stable. Neutrons act a little like a glue, helping protons stick together (this is an oversimplification as too many neutrons is also a source of instability: this is a consequence of a complicated interplay of several forces). But bigger nuclei are less stable and need a higher ratio of neutrons. And some large nuclei are just too large for the forces to keep them together so beyond a certain point all nuclei are unstable.

Some nuclei can be transformed into a more stable (lower energy) nucleus by various forms of radioactive decay. Nuclei with too many neutrons can emit a beta particle (this decay mode converts a neutron into a proton); elements with too many protons can emit a positron (converting a proton into a neutron). Bigger nuclei can become more stable by kicking out an alpha particle (which makes the nucleus significantly smaller, moving it towards the stable zone). Gamma radiation is associated with some of these modes: the high energy photons "mop up" the excess energy (I'm simplifying a lot).

This picture (more detail on wikipedia) sums up what we know about nuclear stability: 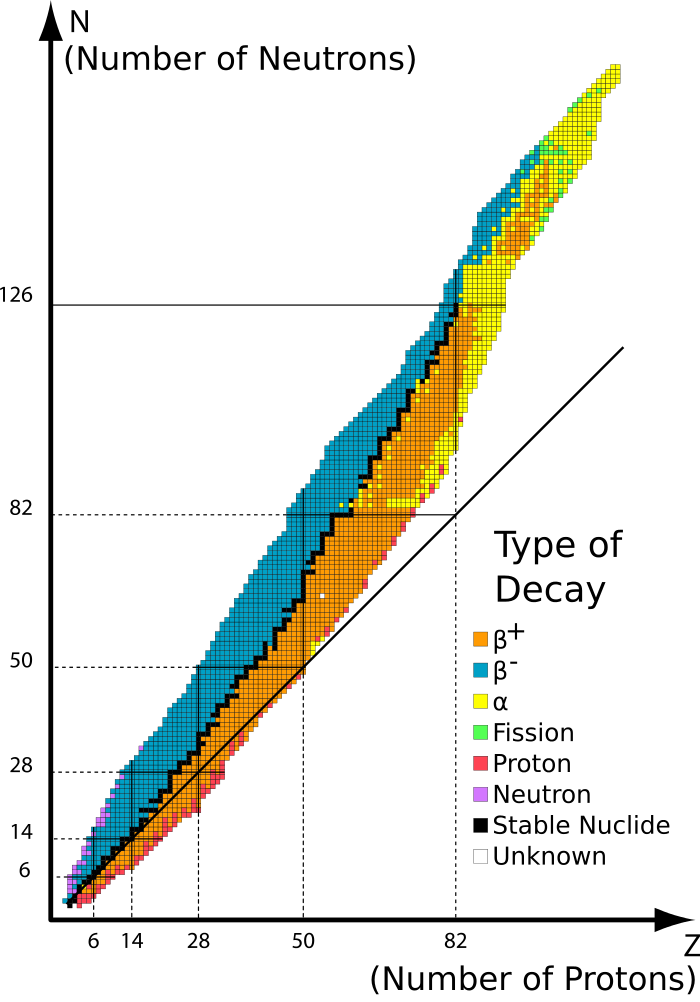 To sum up: nuclei are held together by the interaction of several forces but the forces not equally effective for all possible combinations of protons and neutrons. Some nuclei have so much energy that they are unstable and can decay into more stable nuclei in various ways depending on the mix on neutrons and protons they have. In some cases the forces hiding the nuclei together are strong enough that they never decay.

Not the answer you're looking for? Browse other questions tagged elements radioactivity or ask your own question.

2
Types of radioactive decay
6
What makes elements radioactive?
3
Why elements with high atomic mass (like tungsten) are used in the production of X-rays, in the Cathode-Ray Tube?
5
Why is Promethium the only radioactive Lanthanide?
19
What happens chemically to 5'-radiolabeled aqueous thyroxine (thyroid prohormone) when its I-131 undergoes beta+gamma decay?
1
Excited helium gas from the colision of alpha particles with beta particles?