Is the alkene with the representation $\ce{CH3CH=CHCH2CH3}$ a cis-trans isomer? If so, why? I mean, it is not like the other cis-trans alkenes, because all of them were symmetrical somehow?

First of all, let's talk about geometrical isomerism from the beginning, as I think that you don't understand it properly.

Geometrical isomerism is different spacial arrangements of atoms or groups across any bond under the following conditions:

Now coming to your question, $\ce{CH3-CH=CH-CH2-CH3}$ can show geometrical isomerism because it follows conditions 1 and 2 given above. It can therefore form cis and trans isomers.
Which of them will be the major product depends upon the stability of the compound.

As you can see, in the given conditions there was no mentioning that the compound has to be symmetrical to form cis-trans isomerism. You don't have to look for symmetry, but for the above conditions.

I mentioned earlier that geometrical isomerism is a different spacial arrangement of atoms or groups across any bond, se let me give some examples for that:

Yes, the formula could be for either: 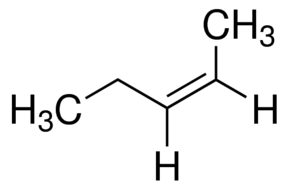 Not the answer you're looking for? Browse other questions tagged organic-chemistry isomers geometrical-isomerism or ask your own question.

0
Cis-Trans Isomerism
2
How can you predict relative Rf values of cis-trans isomers in thin layer chromatography?
28
Relative stability of cis and trans cycloalkenes
10
Converting a cis-alkene to trans-alkene
5
Identifying pentane isomers
1
How many cis-trans isomers does 1-O-stearoyl-2-O-arachidonyl-phosphatidyl-inositol-4',5'-bisphosphate have?
0
Why are we still using cis/trans system while the E/Z system is better than it?
7
In what way trans alkenes are more symmetric than cis alkenes?