In crystal field theory, why do all the metal electrons enter the d orbitals and not the s orbital?

Nevertheless, it is true that in crystal field theory, electrons are assumed to be entirely in the d-orbitals, even for low-oxidation state complexes. For example, nickel(0) in $\ce{[Ni(CO)4]}$ is assumed to have a "$\mathrm{d^{10}}$" configuration. There is a reason for this, the explanation of which requires a molecular orbital treatment. Consider a generic octahedral complex, $\ce{[MX6]^{n-6}}$, which is formed from a $\ce{M^n+}$ ion and six $\ce{X-}$ ligands. We could construct an MO diagram: 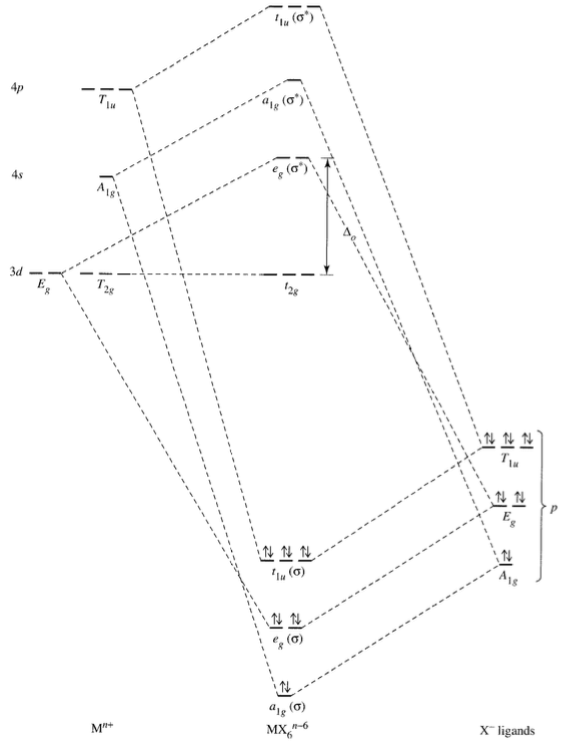 Each $\ce{X-}$ ligand contributes one pair of electrons, which gives rise to a total of six pairs; these six pairs of electrons enter the low-energy bonding MOs $\mathrm{a_{1g} + e_g + t_{1u}}$. These MOs are similar in energy to the ligand AOs, and therefore are likely to be mostly centred on the ligand, which means we can essentially ignore these MOs when we are describing the properties of the complex. (Of course, these MOs are important in the sense that they are responsible for the bonding between metal and ligand. If these bonding MOs did not exist, the complex would not form. However, we are usually much more interested in the higher-energy orbitals.)

The electrons in the $\ce{M^n+}$ ion can be in any of the AOs ($\mathrm{3d}$, $\mathrm{4s}$, or even $\mathrm{4p}$) - it does not matter. The only important thing is that, once the complex is formed, these electrons will enter the lowest-energy MOs according to the aufbau principle. Since those low-energy bonding MOs are already occupied by ligand electrons, the metal electrons will have to go into the $\mathrm{t_{2g}}$ and $\mathrm{e_g^*}$ MOs, which in the simplistic treatment of crystal-field theory are called the "d-orbitals".

The truth is that those two MOs have quite a lot of metal d-orbital character (as you can see from the dotted lines), so crystal-field theory is not entirely wrong. Nevertheless, you can see from the MO diagram why it would be wrong to assume that the metal $\mathrm{4s}$ orbital is filled: what CFT calls the $\mathrm{4s}$ orbital is actually the $\mathrm{a_{1g}^*}$ orbital in the MO scheme. This orbital can only be filled if the $\mathrm{t_{2g}}$ and $\mathrm{e_g^*}$ MOs are already filled, which is not the case unless we are talking about some kind of zinc(0) complex (very unlikely!).

Similar diagrams can be constructed for other geometries (tetrahedral, square planar etc.) and the same point will hold. Therefore, even though $\ce{Ni}$ itself has a $[\ce{Ar}]\mathrm{(3d)^8(4s)^2}$ configuration, the tetrahedral $\ce{[Ni(CO)4]}$ complex will have a $\mathrm{(e)^4(t_2)^6}$ configuration (as you are probably familiar with, in tetrahedral complexes, the d-orbitals are split into $\mathrm{e + t_2}$). Again, in the language of crystal-field theory, both the $\mathrm{e}$ and $\mathrm{t_2}$ orbitals are simply called "d-orbitals", so this is equivalent to having a "$\mathrm{d^{10}}$" configuration.

Not the answer you're looking for? Browse other questions tagged inorganic-chemistry transition-metals crystal-field-theory or ask your own question.

7
Shape of nickel tetracarbonyl
2
Why is the iron(II) on the heme molecule depicted as having 6 electrons in its 5 d non- and anti-bonding orbitals?

4
How can the electronic structure of pentaaquanitrosyliron be explained?
5
Crystal Field Splitting of d-Orbitals in Octahedral and Tetrahedral Ligand Fields
4
Is cobalt(II) in the hexaamminecobalt(II) complex high spin or low spin?
2
Colour of metal complexes with the same type and number of ligands
2
Crystal field splitting of other orbitals
1
Why is the pairing energy not considered when calculating the crystal field splitting energy?