How to determine the configuration of an propargylic alcohol?

I am trying to determine whether the stereocenter of 2-methyl-1-penten-4-yn-3-ol is R or S. 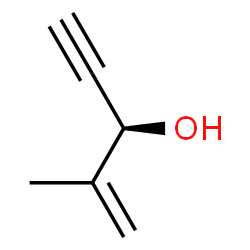 With the ghost atom approach I am determining S: 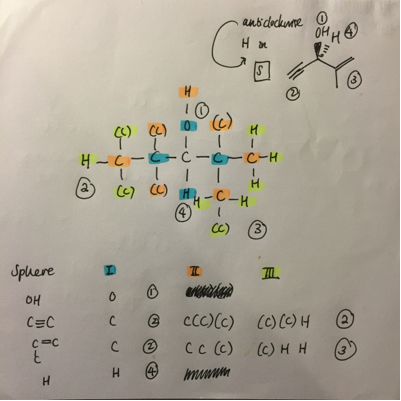 My supervisor said the stereocenter is actually R configuration. Could someone please explain this and tell me where I went wrong?

I think your working is correct, and the molecule should be assigned as S, with the alkyne taking priority over the disubstituted alkene such that the priority goes:

This leads to the S configuration, as you propose.

There is a chance that your supervisor is confused because in IUPAC naming nomenclature, the alkene often (and indeed, in this case) takes priority over the alkyne, which would of course lead to assignment of the molecule as R.

Spoiler alert: the answer is (S).

The complete rules for determining relative priorities of substituents is described fully in P-92 of Nomenclature of Organic Chemistry: IUPAC Recommendations and Preferred Names 2013 (Blue Book).

As stated in P-92.1.4.2, double- and triple-bonded groups are expanded into versions where each multiply-bonded atom is duplicated as many times as is necessary. However,

only the doubly bonded atoms themselves are duplicated, and not the atoms or groups attached to them; the duplicated atoms may thus be considered as carrying three phantom atoms [...] of atomic number zero.

Phantom atoms have the lowest priority, below even hydrogen atoms, since their atomic number is zero. Using this, we can construct the full digraph. Here, (C) represents a duplicated carbon atom, which is a carbon atom carrying three phantom atoms (denoted as zeroes). 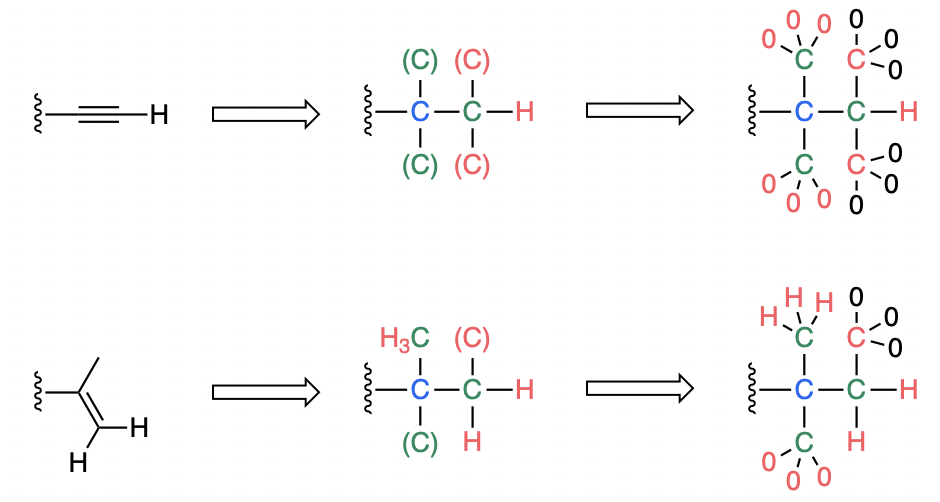 P-92.1.5 describes the rules for precedence. The wording is quite difficult to understand, and I cannot yet convince myself to directly quote from the rules. However, having studied many of the examples given in the subsequent section, the analysis broadly proceeds as follows (I think):

See also: Assign stereodiscriptor to 4th carbon of 3-ethyl-2,4-dimethly-5-(propan-2-yl)heptane-1,7-diol for a similar situation.

1
Nomenclature of methyl groups in an alkanol
5
R and S Configuration Understanding
17
What are the CIP rules for cyclic substituents?
3
How to determine the order of acidity of the following dimethyl nitrophenols
1
Confusion with E/Z configuration
12
R/S configuration of bridging carbon in bicyclic system