I've heard and read (multiple times) two theories have have been around for a while, both of them obvious nonsense.

One states that pressure and friction make the ice melt (turn to water) where the skater's blade comes in contact with it. This is patent nonsense since a puck that weighs very little, or a pencil that weighs next to nothing, slip along the ice as well as any skater. I also find it hard to believe that the temperature of the ice (several degrees below freezing) would suddenly jump several degrees in the split second that it takes for the skate to come in and out of contact with it.

The other theory is that the ice surface itself has the same qualities as water due to some hydrogen molecules still in search of home. This is also nonsense: pour water over a concrete floor and try to skate on it; see how far you'll get.

So my question is: why is ice slippery?

This is a question has been one of interest since 1850, and I found a paper that nicely summarizes some of the hypotheses that you yourself listed, as well as what is considered to be true. I've paraphrased it below.

Michael Faraday was the first to propose that there exists a film of water on ice that freezes when in contact with other pieces of ice, but remains liquid by itself. Though he performed several experiments that supported his claims, most of which involved sticking two pieces of ice together, his ideas were largely dismissed until C. Gurney also suggested that this film of water on play a role in ice's slipperiness.

Gurney hypothesized that molecules, inherently unstable at the surface due to the lack of other molecules above them, migrate into the bulk of the solid until the surface becomes unstable, which prompts the formation of the liquid phase. This came to be accepted, and Charles Hosler compiled very compelling evidence on the the forces required to pull ice spheres apart. He discovered that at vapor pressures below ice saturation, no adhesion occurred below $-4\:^{\circ} \mathrm{C}$. From this they inferred that the expected roughness of the surfaces was removed by the presence of a liquid film whose thickness was sufficient to provide a smooth surface of contact.

More experiments were performed trying to determine the exact thickness of the water film at different temperatures, and the phenomenon was found to occur at temperatures even below $-22\:^{\circ} \mathrm{C}$. 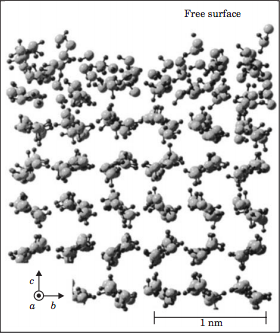 Here is a depiction of what the surface of ice looks like at a molecular level.

For the latest on this I suggest reading here: http://phys.org/news/2015-12-theory-ice-slippery-behavior.html

The key extract is:

"The most important result is that I have constructed a phenomenological shear stress law which is able to explain ice friction as a function of sliding speed and temperature in a wide velocity and temperature region," Persson said.

The author agrees with the premelting theory, but tries to extend it for buried surfaces which are difficult to study due to the nature they are buried.

7
How does iceskating work?

5
Nomenclature for different types of ice
10
What do different forms of ice look like?
20
What makes oceanic desalination so expensive?
10
What makes water a liquid (when it is)?
52
What is the pH of ice?
7
Water and Ice - density