Stereoselectivity of dihydroxylation with osmium tetroxide

Dihydroxylation responds to steric effects and proceeds at less hindered positions. What will be the major product in the following reaction if the reagent used is $\ce{OsO4}$ followed by $\ce{NaHSO3}$? 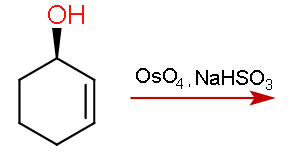 Won't interactions between $\ce{- OH}$ bring $\ce{OsO4}$ on the same side as $\ce{- OH}$? Or will the $\ce{OH}$ sterically hinder the reagent from attacking the olefin from the same side?

Why I am I having this doubt is because I read that $\ce{m-CPBA}$ can be directed by hydroxy groups. For example, if the compound given below were to react with $\ce{m-CPBA}$, the product formed is:

The reason is because of interactions between $\ce{m-CPBA}$ and the substrate like this: 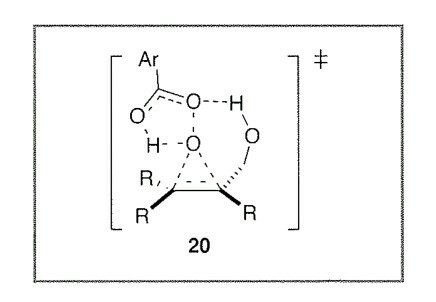 Dihydroxylation responds to steric effects and proceeds at less hindered positions. What will be the major product in the following reaction if the reagent used is osmium tetroxide followed by sodium hydrogen sulfite? 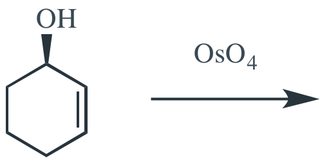 The crux of the original question seems to be why standard Upjohn dihydroxylation conditions (cat. osmium tetroxide w/ NMO as the terminal oxidant) doesn't respond to hydrogen bonding based directing effects, whilst stoichiometric osmium tetroxide in combination with TMEDA does.

One of the earliest reports of diamine ligands on osmium (of which TMEDA is one) was by EJ Corey's group in 1996 (, who obtained a crystal structure of osmium tetroxide bound to, in this case, a chiral diamine in a bidentate fashion. (If you're familiar with the Sharpless Asymmetric Dihydroxylation you'll see why this was an important first step). 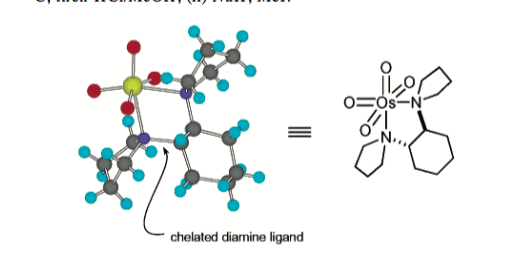 With the coordination of diamine ligands to the osmium tetroxide understood, several groups began to think about why this allowed for hydrogen bond based direction of the dihydroxylation. The most comprehensive reference I've found is a chapter in Organic Reactions by Donohoe et al. (DOI: 10.1002/0471264180.or076.01 sadly not widely available, but a .doc file missing the figures is available from the publishers website which may be somewhat helpful).

Donohoe's group (in collaboration with several others) also published a detailed study of the transition states of these directed reactions in 2002 (DOI: 10.1021/jo026161y hopefully more widely available).

In the paper Donohoe proposes two possible TS structures for the directing effect, with either the oxygen or the nitrogen being involved in coordination to the hydroxyl of the substrate. Through NMR and IR work it was eventually determined that TS-A was the true pathway in which the TMEDA is donating to the osmium tetroxide, with the carbonyl on osmium using its lone pair to coordinate to the hydroxyl of the substate.

But won't the same reason apply for m-CPBA

This part of the question should maybe be another question entirely, but I think its fair to say that osmium tetroxide bears zero resemblance to mCPBA, the electronics of a metal centre vs the electronics of a peracid are completely different and as such their relative ability to hydrogen bond and hence be directed will be significantly different.

Not the answer you're looking for? Browse other questions tagged organic-chemistry reaction-mechanism stereoselectivity or ask your own question.