Rank the following compounds in decreasing order of acidity:

Since the ortho effect is proportional to the size of the substituent, it will be the greatest in the case of iodine and smallest in the case of fluorine. So, the molecule will be more non-planar in 2-iodobenzoic acid.

So resonance will be inhibited in all the above compounds. But what will happen to the acidity?

Overall, steric and polar effects operate in tandem to give an overall acidity for the benzoic acid. It's perhaps not intuitive which one will dominate (e.g. fluorine is far more electronegative, but also far smaller than iodine, so which is more acidic).

The table below, taken from the cited paper, attempts to separate out steric and polar effects through calculations on both the acid and its conjugate base. Sadly, they only look into $\ce{F}$ and $\ce{Cl}$ (no $\ce{Br}$ or $\ce{I}$), but it can be clearly seen that:

At least 3 (or 4) facts are required to be considered for the acidic strengths of halogen acids:

The intramolecular hydrogen bonding between the halogen substituent and the adjacent carboxyl group (as shown below) would decrease the acidity of the halobenzoic acids: 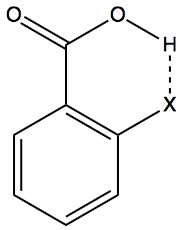