Mechanism of reaction between triphenylmethanol and acetyl chloride

When I draw out the structures of the molecules, I see this: 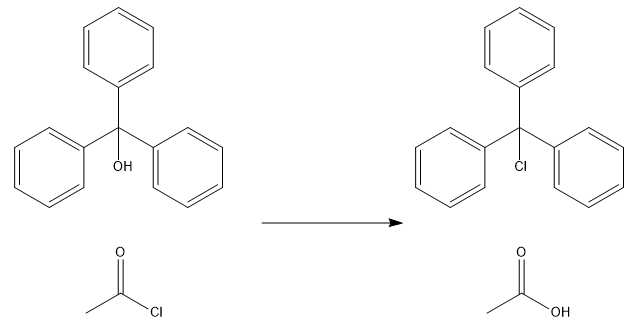 But the $\mathrm{S_N1}$ mechanism doesn't make sense to me since $\ce{OH-}$ is a bad leaving group, and there is nothing to protonate it.

I find it unlikely that the substitution proceeds via the hydroxyl group directly leaving. If there is any evidence that this reaction proceeds via direct $\mathrm{S_N1}$ of $\ce{OH-}$ by $\ce{Cl-}$, I would be very interested to see it. When an alcohol and an acyl chloride are mixed, I think it is much more probable that they will initially form the ester via nucleophilic acyl substitution: 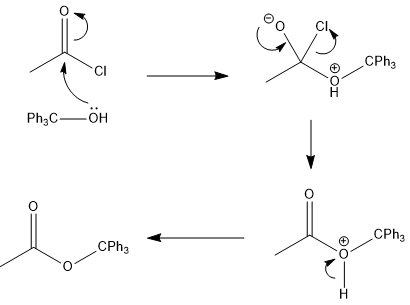 Presumably, this ester is rather unstable because of steric repulsions between the three phenyl groups and the ester group. So now, the $\ce{-OAc}$ group ($\ce{Ac} = \ce{COCH3}$) can leave as a relatively stable carboxylate ion to give the resonance-stabilised carbocation:

The carbocation is then intercepted by chloride ions that were formed earlier to give the product you want. So, the second part of the reaction is a $\mathrm{S_N1}$ substitution of $\ce{OAc-}$ by $\ce{Cl-}$.

There is another pathway possible, since $\ce{HCl}$ is formed from the initial reaction of the alcohol with the acyl chloride. If $\ce{HCl}$ is present in appreciable quantities, it can protonate the original alcohol and you could perhaps have a direct $\mathrm{S_N1}$ of $\ce{H2O}$ by $\ce{Cl-}$.

4
What is the mechanism for the reaction of acetyl chloride and aniline?
3
Distinguishing among SN2/SN1/E1/E2 for a secondary bromide
3
Determining Rate Law and Reaction Mechanism from Method of Initial Rates
9
Why are protic acids not used for the formation of thioacetals?
64
How do organic chemistry mechanisms become accepted?
4
Synthesize coumarin from 4-allyl-2-methoxyphenol (eugenol)