Ring closure via intramolecular nucleophilic substitution or intermolecular dimerization: which is favoured?

What reaction does the following enolate undergo?

Both are nucleophilic substitution reactions. Ordinarily, the intramolecular product should be favoured, but I know that the transition state has a geometrical constraint in that the incoming nucleophile must approach the C-Br bond from the opposite side. Would that favour the intermolecular reaction instead?

I went through March's Advanced Organic Chemistry and found this: 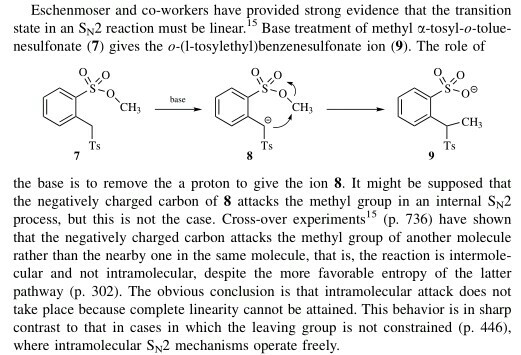 And this from Clayden's Organic Chemistry: 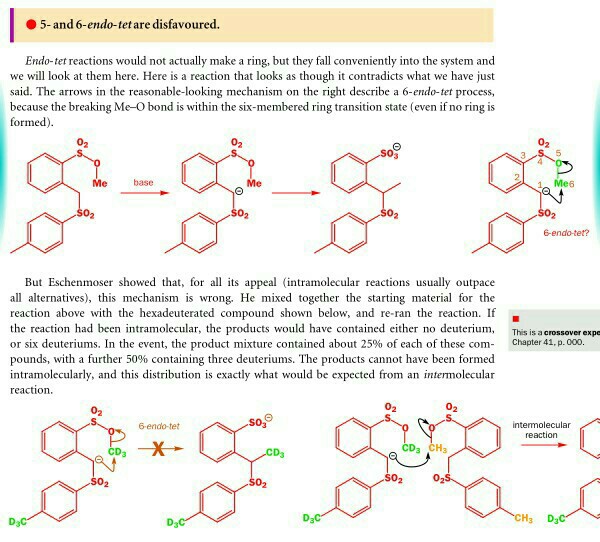 That's why I am not able to decide if the reaction is intermolecular or intramolecular.

I'd also like to add that the intramolecular cyclisation that you proposed is a 5-exo-tet reaction according to Baldwin's classification.

If you look up Baldwin's rules, you'll see that 5-exo-tet reactions are perfectly fine and allowed. Evidently the compound you drew can twist itself a little bit to accommodate the linear transition state. (I am using "linear" loosely to refer to the arrangement of the incoming nucleophile, the carbon, and the leaving group.) Therefore, in this case, the intramolecular reaction will predominate, as is usual.

The disfavoured reactions that you cited from those textbooks are 6-endo-tet reactions. In such compounds, having a linear transition state is an issue as it would lead to too much ring strain.

As an ending note: Baldwin's rules are nothing more than an empirical observation. You might ask why 5-exo-tet reactions are fine, but not 6-endo-tet: where is the threshold or boundary which makes something favoured or disfavoured? The answer is, they did the experiments and found out that that's just how it is. No more, no less.

It will be the first product. Generally, Intramolecular reactions happen much faster than Intermolecular reactions. Imagine you are in a room with a few people and Godzilla picks up the room and shakes it. As you go tumbling around the room are you more likely to smack your head into your own knee or someone else's knee first?

8
Why does the Wurtz reaction form such an unstable compound with torsional strain?

1
Reductive amination of (protected) 3-Oxopropanenitrile: Will azetidin-2-ol be formed via intramolecular ring closure?
16
If SOCl2 reacts with alcohols via SNi, why doesn't POCl3?
10
What are SN1ʹ and SN2ʹ reactions?
7
Why is ortho-hydroxybenzoic acid more acidic than its para-isomer?
4
Do alkyl halides with an alpha nitrogen atom undergo SN1 reaction?
2
Electronic effects of substituents in the benzyne mechanism
4
Stereoselectivity of ring closure in intramolecular iodolactonisation