How can I control the oxygen in an erlenmeyer flask in a bioprocess?

Thanks for advance for your ideas.

Controlling oxygen in a flask can be achieved by bubbling a purge gas of some description through it. This will entrain and remove oxygen from the solution as well as creating an oxygen-depleted headspace.

If you have a regulated nitrogen supply, a rubber stopper with a hole in it, an open-ended pasteur pipette and a length of hose, you can bubble nitrogen into the solution to purge oxygen. This requires the vessel to be open somewhere else to equalise pressure, which is achievable with a multi-neck flask but not with a standard Erlenmeyer flask. You can get around this with a stopper with two holes. Continual positive pressure should keep the external atmosphere out. 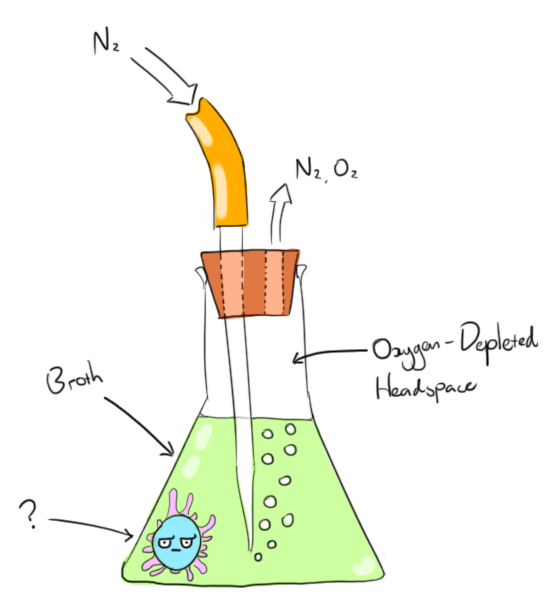 Depending on how vigorously you want to shake your flask, this may or may not be reasonable. If you are using a stirrer bar you will obviously want to give the pipette sufficient clearance.

As far as controlling addition of oxygen, this would seem to be a bit trickier as you are probably not going to be providing continual positive pressure. You might be able to get around this, depending on the specifics of what you are doing, by pumping in oxygen in the same way and using a balloon or a gas syringe or something to deal with the overpressure.

For clarity, I'm going to separate this into two parts: purging the oxygen from the flask, and filling the flask with a particular mixture of gas(es). It's the same idea in both cases, but the first is much easier than the second.

This is usually done with Nitrogen, as it is one of the cheapest inert gases. You'll take a line from your nitrogen tank, pass it into your flask, and open it. You will need to have a second opening in your flask so pressure doesn't build up, as Richard Terrett describes in his answer. As long as you have the nitrogen flowing, there will be enough positive pressure in the flask that oxygen won't get in from the room. The headspace in your flask should purge quickly, but your culture will take longer. Agitation, either by shaking the flask or by stirring the culture, will make that go much faster.

Establishing a given atmosphere

This is really the same process as above: instead of pure nitrogen, you pump in the mixture of nitrogen and oxygen you want. The system will eventually equilibrate to the mixture you're pumping in. The hard part is getting the mixture you want. When I did this in the past, we used digital mass flow controllers (DMFC's). We would flow oxygen through one DMFC and nitrogen through another. The output of the two DMFC's would mix together before going into the flask. Once you have it set up, it's just a matter of setting the two DMFC's to the mixture you want. The big difficulty with that is that DMFC's are expensive. I don't know how much ours were, but they were made by Bronkhorst, and it looks like that type of DMFC starts at around $2000 each. The nice thing about using DMFC's is that you can control the oxygen composition to within less than 1% by mass.

Not the answer you're looking for? Browse other questions tagged biochemistry chemical-biology or ask your own question.

4
Carcinogens, how do they work?
3
Gold's atomic structure and bonding in relation to the separation techniques used
3
Storage of Urine
0
How is Oxygen Toxic?
1
The time-dependent pH value in a fermentation
1
Indirectly Measuring Diffusion of NO2 into Water
10
How can I properly calculate the isoelectric point (pI) of amino acids?