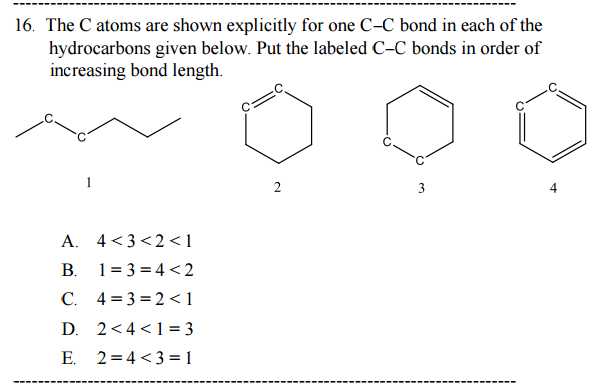 Well, 2 cannot be equal to three to start off, because a double bond it way shorter than a single bond.

The Answer to this is D, 2 has the shortest bond because it is a double bond, next 4 is a benzene ring, which is a resonance structure, which means that all the carbons technically have partial bonds between each other, or you can imagine the double bonds to be continuously rotating between the different carbons. Lastly 3 and 1 both have normal single bonds, so would have an equal bond length.

Therefore, since the double bond is shortest, the resonance between a single and double is a bit less short, but not as long as a single bond, and a single bond is the longest, the answer it 2(double bond)<4(between double and single bond)<3&1(which are both single bonds)