Every IUPAC Systematic name I have come across, I have understood up until now. This is Carminic Acid ($\ce{C22H20O13}$): 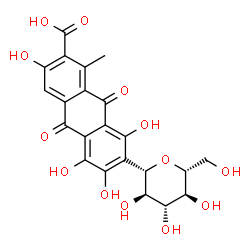 This is the IUPAC Systematic Name for Carminic Acid:

I have 3 main questions:

I would have thought the numbers assigned to the carbon atoms would be the following:

According to the current version of Nomenclature of Organic Chemistry – IUPAC Recommendations and Preferred Names 2013 (Blue Book), the preferred name (PIN) for the parent ring component consisting of three benzene rings fused in a linear manner is the retained name anthracene.

According to Subsection P-14.4 (a), this fixed numbering must be used in PINs and in general nomenclature.

The prefixes ‘hydro’ and ‘dehydro’ are used to indicate addition and subtraction, respectively, of hydrogen atoms (see Subsection P-31.2.1). Hence, the PIN for the ring component of the structure given in the question is 9,10-dihydroanthracene:

(Note that locants are placed immediately before that part of the name to which they relate (see Subsection P-14.3.2); i.e. ‘…anthracen-2-yl’. Thus, the name ‘…-2-anthracenyl’ given in the question is not correct.)

The prefix ‘anhydro’ expresses the corresponding intramolecular ether, which is formally obtained by elimination of water from two hydroxy groups of a single molecule of a monosaccharide or monosaccharide derivative (hence the structure is commonly called an intramolecular anhydride). The prefix ‘anhydro’ is preceded by a pair of locants identifying the two hydroxy groups (see Subsection P-102.5.6.7.1).

Just note that 1,5-anhydro-ᴅ-glucitol would be the correct name for the carbohydrate part itself (without the anomeric C-1 OH group). However, using this name type for the whole compound is rather wrong.

This is an example of C-glycoside, or more correctly, C-glycosyl compound. The nomenclature is described in P-102.6.1.4.

Related carbohydrate (as glycosyl group is formed by removal of the anomeric hydroxy group from the cyclic monosaccharide, as stated in P-102.6.1.1.1) is β-ᴅ-glucopyranose.

The correct “natural product” IUPAC name would be
7-(β-ᴅ-glucopyranosyl)-3,5,6,8-tetrahydroxy-1-methyl-9,10-dioxo-9,10-dihydroanthracene-2-carboxylic acid. 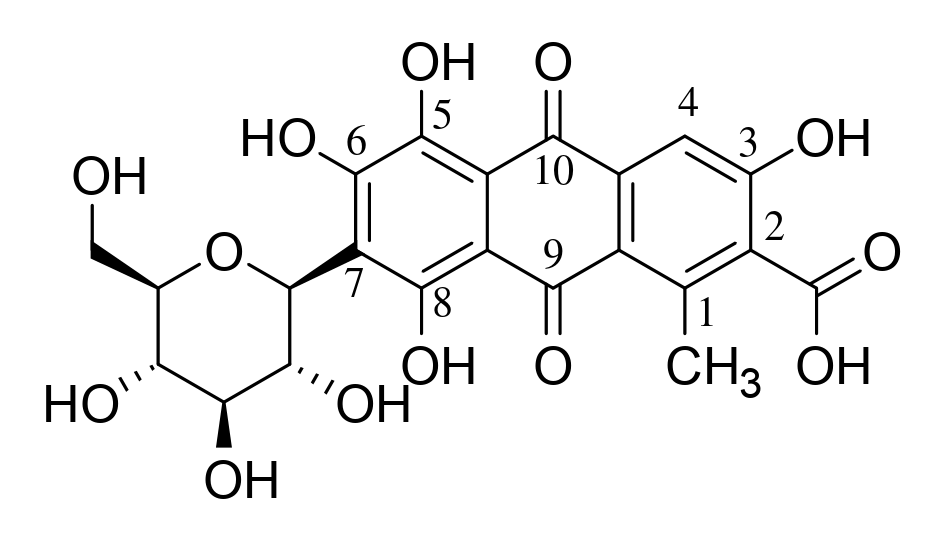