Is soap the natural form of Sodium Lauryl Sulfate?

I was told that "Sodium Tallowate, sodium cocoate and sodium palm kernelate are the 'natural' forms of SLS". Is this true? I thought "natural" SLS would be SLS derived from a natural product such as coconut oil.

organic-chemistry everyday-chemistry
Share
Improve this question
asked May 16, 2012 at 13:24

Conventional soaps are the sodium salts of long chain carboxylic acids (aka fatty acids). These are formed by the hydrolysis of triglycerides, a process known as saponification. This process breaks the triglyceride at its ester linkages and yields three fatty acid molecules and glycerol molecule.

As the aforementioned wikipedia article indicates, sodium lauryl sulfate is formed by refunctionalising the fatty acid lauric acid. In this case, the $\ce{R-OOH}$ (carboxylic acid) head group has been replaced with an $\ce{R-OH}$ (alcohol) group, which is in turn replaced by $\ce{R-OSO3^{-}}$ (sulfate). Here I am using $\ce{R}$ to refer to the long alkyl chain of the molecule.

I'm not sure whether sodium lauryl sufate occurs naturally, however the other molecules you mention are different in the sense that they have carboxylate ($\ce{R-COO^{-}}$) head groups whereas sodium lauryl sulfate has the sulfate head group ($\ce{R-OSO3^{-}}$). Both classes of molecule will act as surfactants as they have polar head groups which are hydrophilic, and nonpolar alkyl tails which have an affinity for fats and oils.

(These were drawn using the nifty ChemFig package for (La)TeX.) 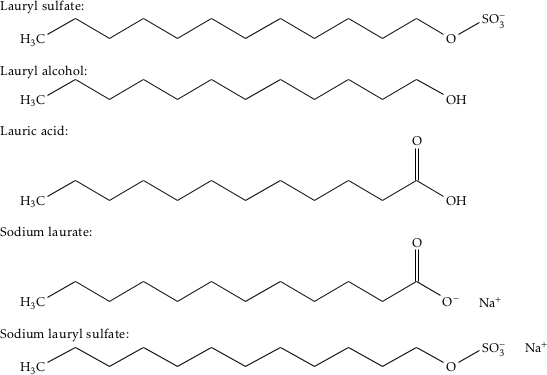 The last two (sodium laurate and sodium lauryl sulfate) are sodium salts. Both carboxylic acids ($\ce{R-COOH}$) and hydrogen alkyl sulfates ($\ce{R-OSO3H}$) are fairly willing to ionise to give the corresponding carboxylate ($\ce{R-COO^{-}}$) or sulfate ($\ce{R-OSO3^{-}}$). Sodium ions happily associate with these anions, balancing the negative charge.

3
What is the chemical structure of the cocoate ion vs. the olivate ion?

3
What is the chemical structure of the cocoate ion vs. the olivate ion?
3
What non-poisonous chemicals can get rid of SLS effectively?
0
Finding the mM concentration of capric acid (decanoic acid) in coconut oil
5
Process to separate Lauric Acid from Coconut Oil
6
Is E1cB possible in the reaction of cyclopentadiene with acetone in presence of ethanolate?
3
Producing soap from sodium carbonate and oil