Synthesis of 2-methyl-4-nitrophenol from benzene?

Benzene first reacts with the reagents $\ce{CH3Cl/AlCl3}$, to attach a methyl ($\ce{CH3}$) group to the benzene ring.

Then I suggested reacting with $\ce{OH-}$. Because the methyl group is an activator, it will cause the $\ce{OH-}$ electrophile to attack either in the para or ortho positions. In this case I suggest it will attack the ortho position. Now we have two activators, hydroxyl and methyl, but because hydroxyl is a stronger activator, the position where the next molecule attacks will be controlled by the hydroxyl group.

The next electrophile that attacks is the $\ce{NO2+}$, through the reaction $\ce{HNO3/H2SO4}$, the nitro group will attack the para position of the benzene and we get our final product 2-methyl-4-nitrophenol.

However, I am not 100% sure if the methyl group should be introduced first to form toluene or the hydroxyl group to form a phenol.

There is a lot of good thinking in your proposed synthetic strategy. The one major shortcoming is, as @Mithoron points out, $\ce{OH^{-}}$ is not an electrophile.

We need to introduce a methyl, hydroxy and nitro group onto a benzene ring. If we look into our synthetic "toolbox" here are some thoughts that might come to mind:

There are a lot of ways to pull this synthesis together, but here is a relatively direct proposal. 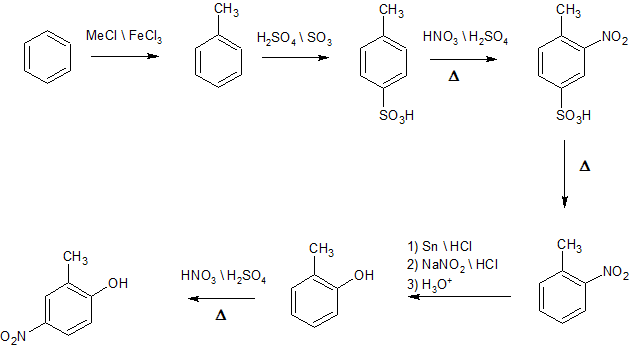 Not the answer you're looking for? Browse other questions tagged organic-chemistry synthesis phenols nitro-compounds or ask your own question.

5
Heating p-Bromobenzenesulfonic acid in the presence of dilute HCl
1
Synthesis of 5-chloro-2-ethenyl-1,3-diiodobenzene

9
Aromatic ring substitution: how are MNT and DNT further nitrated if nitro groups deactivate benzene rings?
3
How to make p-chloroanisole from methanol and benzene?
12
Electrophilic substitution on disubstituted benzene rings
6
Most activated position for Electrophilic addition in substituted biphenyls
3
How to determine the order of acidity of the following dimethyl nitrophenols
3
Reactivity comparison of phenol and toluene towards electrophilic substitution
3
How can I synthesize 2‐amino‐3‐(chlorosulfonyl)benzoic acid from toluene or benzene?