What will be the order of $\mathrm{S_N1}$ solvolysis rates for these? 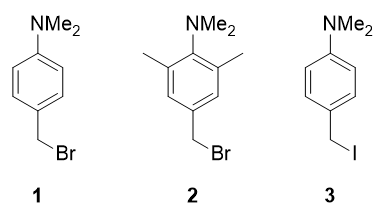 I'm confused between the second and third options. $\ce{I-}$ is a better leaving group than $\ce{Br-}$, but the carbocation formed in 2 is more stable than 3. So how are we supposed to decide between them?

In the second compound, steric repulsions (denoted by the curly lines) between the N-methyl groups and the methyl groups on the ring occur:

The rate of solvolysis therefore increases in the order: $2 < 1 < 3$. The effect described above is called "steric inhibition of resonance".

A similar effect is observed in azo coupling:

In the second reaction, the nitrogen lone pair is not delocalised into the ring and the ring is therefore not nucleophilic enough to attack the diazonium ion.

8
Which of these carbocations are more stable?
1
Which is the strongest base among the given anilines?