Why are these molecular orbitals invalid for hexatriene?

Here are the MOs (more accurately, the breakdown of the MOs) for conjugated hexatriene: 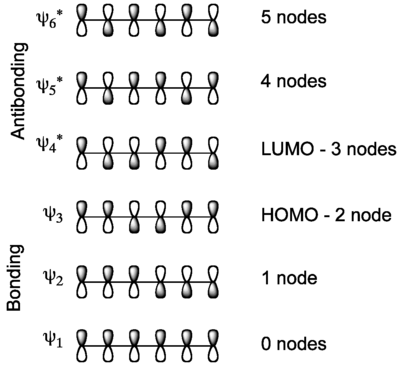 Now, when first asked to draw the MOs myself, I drew this one for $\psi_3$:

It still has two nodes, and is still symmetric. I see nothing wrong with it, except that it doesn't match the "correct" MOs.

Now, as I understand it, MOs are formed from various combinations of atomic orbitals, subject to a few rules regarding symmetry. From what I know, the two MOs I've given above should be valid MOs for hexatriene, or at least components of an MO of hexatriene.

Why aren't these two MOs valid? Also, is there a methodical way to obtain the sequence of MOs in the general case(of a conjugated polyene)?

The general method to find molecular orbitals of π electrons in conjugated hydrocarbons in first approximation is called Hückel’s method. It is an undergrad-level topic, and you should find lots of explanations on the internet or in undergrad physical chemistry.

The wave function you propose is actually equal to $(-\psi_1 +\psi_3 + \psi_5^*)$   (with normalization factor not indicated). Thus, it is not an eigenstate of the system, and not a molecular orbital. But… unless you know Hückel's method, I am not sure there is an intuitive reason to discard this possibility: it has the right number of nodes (i.e. +/– inversions) for $\psi_3$.

I read up a bit about Huckel theory. There's a pdf that explains this particularly well.

At one point, the following formula is derived at one point:

which gives the coefficient (sans a positive normalisation constant) of the atomic orbital of the $s$th atom in the $k$th MO of a conjugated linear or monocyclic system on $n$ atoms.

A quick and dirty method has also been provided. 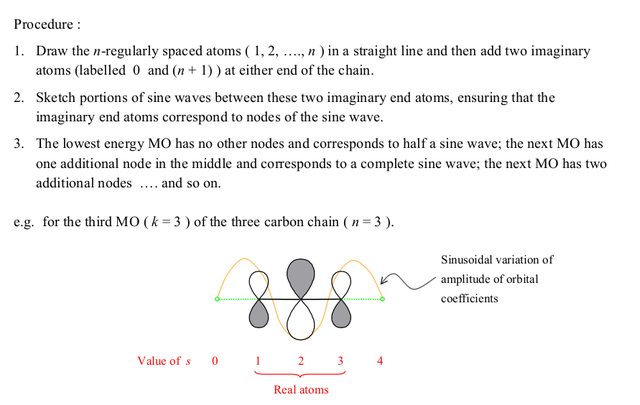 Using this, one can get a general idea of how the MO should look, and then one can get the exact +/- sequence by considering the number of nodes. Note that this is really the same thing as applying the $c_s$ formula given above, just in a graphical manner.

I'm no expert, but looking at this reminds me of a problem I had with benzene. There's a totally unscientific pattern here that might help you remember the correct molecular orbitals. I only learned this from looking at your molecular system here, so I don't know how well it extends to other systems (it might!)

Psi-4: Similar to the previous example, from left to right, the correct arrangement has 3 "opposite-sign" pairs. Yours has at most two pairs of one type (2 "same-sign" pairs in your case)

Psi-5: In the psi-5 case, an alternative array with superior pairing doesn't exist, but an arrangement with equivalent pairing does; however, this latter array would sacrifice the appropriate symmetry and is therefore not correct.

I just came up with this trick here on the spot, so I don't know how consistently this it works (and physically I'm sure it's terribly wrong). It does seem to work with smaller even-number systems, but it has trouble dealing with nodes in larger even-systems like octatetraene. The pattern may otherwise be generalizable to smaller even-number-electron conjugated pi systems.

Where this pattern fails

The pattern starts to break down when you examine odd-number-center systems and large even-center systems with nodes (like psi 3 and 6 in octatetraene). With some modifications, the pattern can still work, albeit perhaps becoming too complicated for practical use. Also none of it applies to conjugated cyclic systems which have degenerate orbitals.

For odd-number systems and even-system with nodes (psi 3/6 in octatetraene), counting the interactions between adjacent orbitals becomes necessary. For example, in pentadienyl radical/ion, my pattern would suggest the psi-3 orbital as down/up/up/up/down, but the correct answer is down/node/up/node/down. Counting adjacent like-sign orbitals as +1 and nodes as zero, this only makes sense if adjacent opposite-sign orbitals are valued at slightly less than -1. The sum of the orbital interaction then favors the system with nodes. This applies in even-systems as well, such as comparing the presence of nodes in psi-3 (up/up/node/down/down/node/up/up) of octatetraene to an alternative up/up/down/down/down/down/up/up array (which is a rearrangement of psi-2, similar to how butadiene's psi-3 compares to its psi-2 -- my pattern works there). Kind of complicated then I guess.