Reasons which explain why the efficiency of a reaction increases as the average rate decreases?

Reasons which explain why the efficiency of a reaction increases as the average rate decreases? in other words, why does a slow chemical reaction is more effective than quick ones? I done an experiment and the reletionship I found was that. I added a catalyst to vary the average rate (speed) of my reaction and the slower it took to react, the most product was got. Cant find a possible reason for that. any help??

Well it depends on the reaction. A notable example is the Haber process. The Haber process is the production of ammonia gas from nitrogen and hydrogen gas: $$\ce{2N2 + 3H2 -> 2NH3 + heat}$$ This reaction is extremely important in the industry sector as ammonia gas is used for a wide range of products such as fertiliser, bleach, cleaning agents and in WW2, it was used to make explosives.

Lets go off on a tangent for a moment:

In WW1 the Germans had very little resources due to British ships blocking Germany's allies from providing them materials. This meant that they had to produce great quantities of ammonia themselves as they desperately needed it to make explosives. Thankfully German chemistry, Fritz Haber, created the Haber process which allow the Germans to mass produce ammonia. It is estimated that WW1 was prolonged by 2 years due to the creation of the Haber process. Haber later received the Nobel Prize in 1918 for his production process of ammonia and 'contribution to agriculture'.

So the question you might ask is why was creating ammonia so hard? After all it is a pretty simple reaction. Well this has to do with your question.

You see, producing ammonia gas is actually quite easy, however the main issue is that it is very difficult to get a high yield at a fast rate. The reason is due to the extremely high activation energy of this reaction. This is because for the reaction to occur, the extremely strong triple bonds of nitrogen must first be broken, which requires quite a lot of energy. This high activation energy means that the reaction is going to be really slow. This shown by the Arrhenius equation: $$k = A\mathrm e^{-\frac{E_\mathrm A}{RT}}$$ However we are able to increase the rate of the reaction. If we were to increase the temperature, according to Arrhenius equation, the rate of the reaction will increase. However now there is another problem, this time about the yield of the reaction.

Note above in the chemical equation, the Haber process is an exothermic reaction, meaning that heat is released. Now if we were to increase the temperature, according to Le Chatelier's principle, the equilibrium will shift to the left. This means that less ammonia gas will be produced. This is shown by the graph below: 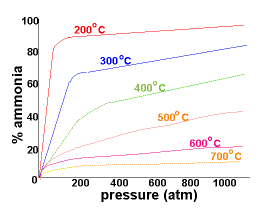 So the above conundrum describes your question. By increasing the temperature of the sytem, you can increase the rate of the reaction, however by doing so you are going to decrease the yield.

Note: this is only true if the reaction is exothermic. If it is endothermic, then the yield will increase with temperature.

Not the answer you're looking for? Browse other questions tagged reaction-mechanism experimental-chemistry analytical-chemistry catalysis or ask your own question.

1
Why can sulfur act like a catalyst?
2
Rate law of the iodine clock reaction
0
Experimental difficulty with the iodine clock reaction
1
Why does the rate of reaction increase less than proportionally to the increase in mass of catalyst?
3
Why do you use catalysts if they increase the rate of forwards and backwards reactions equally?
14
Is it possible to make an anticatalyst?
2
High concentration of ferric ion catalyst decreases rate of decomposition of hydrogen peroxide in the Fenton reaction