Is there a bifurcation node in the potential energy as a function of reaction progress equation of chemical reactions?

I originally posted a similar question on math.stackexchange.com, but I believe I might have a better chance of having my question answered here after giving it some time.

I was thinking about the activation energy of chemical reactions, and I was wondering if there exists a bifurcation node somewhere in the transition state. I'm wondering about this image: 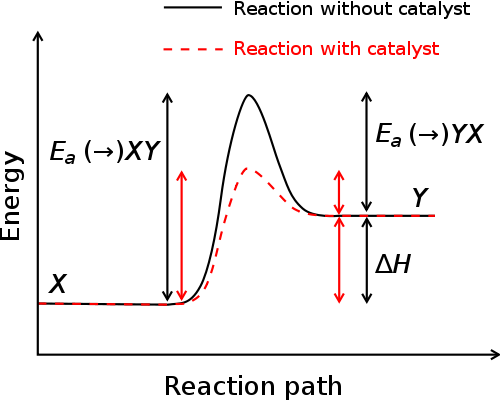 Here's what's bugging me about it. I don't have an actual equation to the curve, so I can't necessarily do a quantitative analysis. Regardless, I can at least make conjectures about it.

Personally, my instincts are telling me, provided there truly is a bifurcation node, it would be stable at the peak, which sounds odd. From the mathematical definition, stability indicating that any small perturbations from the bifurcation point will "dampen" out in time, rather than flying off into infinity. In context though, that doesn't sound correct. The reaction has to go one way or another. The peak, representing the transition state, is said to be unstable chemically.

Another issue is with the parameter of time. It has to go forward. In order to analyze it, we would more than likely have to nondimensionalize it.

These are just some of my current thoughts on it. My question is regarding the mathematics of it. I'm just debating whether there is a bifurcation point (which I believe there is), and if so whether it is stable, unstable, or halfstable. Basically, I'm not sure if my reasoning is correct right now. Any help would be appreciated.

Edit: Let me also add that instability does not necessarily mean that a phase point will fly off into infinity. Stability and instability can be be local. In other words, an unstable point can fly into another equilibrium point.

I'm going to add a lot more detail to this post as I've done some more research and thinking on this topic. First off, my assumption was correct - in fact, transition state theory is, in part, based on potential energy surface concepts. Hence, saddle-points (bifurcations), are incorporated into the theory. Second, time is not necessarily the independent variable. Typically, the graph of potential energy vs. I.V. where the I.V. is usually a coordinate of some sorts - for instance, bond lengths. That said, I believe that modifies my question.

To explain, what I am curious about is the stability of the transient point as a function of time. Right now, my graph does not reflect that, and therefore my conclusions are not necessarily correct. The slope would be, in terms of instantaneous slope, $\frac{dV}{dq}$. But that's not what I want. Rather, I'm looking for $\frac{dV}{dt}$. Without showing the derivation, one can come up with an equivalency: $\frac{dV}{dt} = -(\frac{dV}{dx})^2$. What winds up happening, now, is that the local maxima in the picture corresponds to an unstable fixed point. That makes sense. Any thoughts on this?

Browse other questions tagged reaction-mechanism kinetics or ask your own question.

3
Why does carbocation stability increase in the order 1°, 2°, 3°?
3
What does reaction exothermicity say about the stability of molecules
23
What are some good examples of rate equations for a math class?
2
The effect of concentration on the rate of a homogenous reaction
2
Should binding constants be unitless when deriving fractional occupancy equations from reactions?
0
Potential energy versus reaction coordinate (graph of Gibbs free energy)
3
Formation of hydrogen bromide: Does the concept of “order” apply to this reaction?
2
Why is activation energy drawn in a potential energy diagram in reactions?