What is the major product of the following reaction sequence? 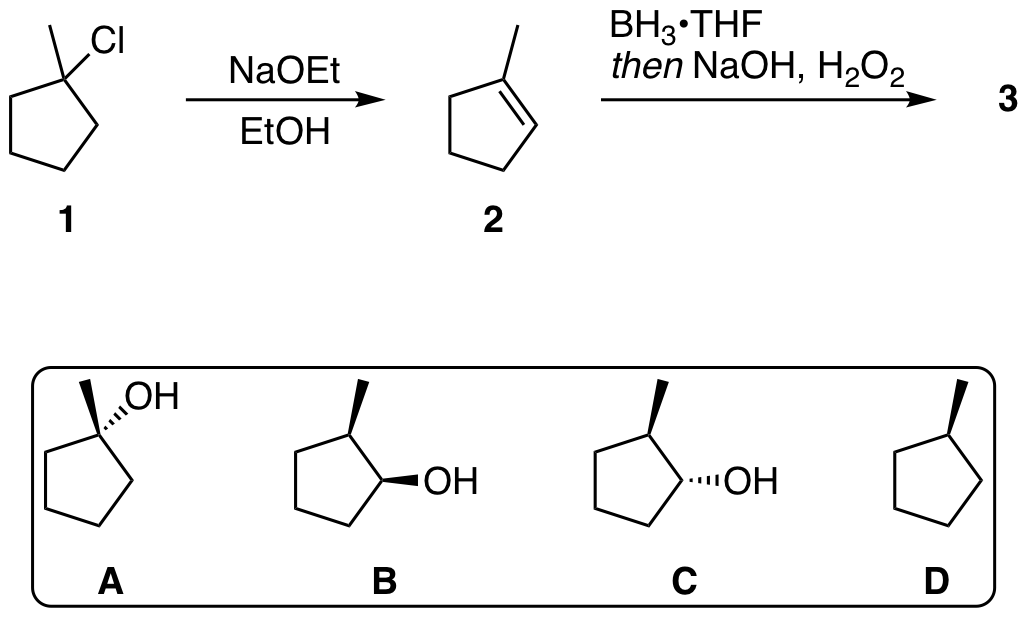 I'm supposed to work out the structures of both 2 and 3, but I already know 2 to be 1-methylcyclopentene (as the most substituted alkene is formed during elimination).

For the hydroboration step, boron should add to the less substituted carbon (in an anti-Markovnikov fashion). However, I'm not sure which of the two choices B and C is correct. Why should one diastereomer be formed preferentially over the other?

The second step is a syn addition of the boron hydride. As depicted below, it will result in an anti-Markovnikov product with the boron on the less-substituted carbon. Both hydrogen and boron are on the same side of the former double bond and these two are the ones we refer to when we say syn addition.

The final step, the oxidation by hydrogen peroxide, is stereospecific with retention. So the newly-formed $\ce{C-O}$ bond is on the same side as the former $\ce{C-B}$ bond. Thus, an anti relationship is established between the methyl group and the hydroxy group.

Since 1-methylcyclopentene is planar, a racemic mixture of enantionmers is formed; neither re nor si side are favoured. The scheme below shows the attack from the si side of the $\mathrm{C2}$ atom.

Not the answer you're looking for? Browse other questions tagged organic-chemistry stereochemistry c-c-addition organoboron-compounds or ask your own question.

1
Carbon decrease from 1-octyne to 1-hexene
13
Why does treatment of a geminal dihalide with sodium amide lead to an alkyne and not an allene?
12
Elimination reaction on 2-fluorobutane using alc.KOH
2
(stereochemistry)epoxide from alkene
11
Why does boron add to the less substituted carbon in the hydroboration of an alkene?
2
Why is the carboxyl proton in salicylic acid more acidic than the phenol proton?