Why do the melting points of Group 15 elements increase upto Arsenic but then decrease upto Bismuth?

A lower melting point is an indication of a lesser organised solid structure. So the question is actually:

What in the structures of arsenic and phosphorus make them less prone to melting?

Let’s start off by separating nitrogen from the entire group. It is a prime example of a diatomic gas such as hydrogen with a very inert $\ce{N#N}$ triple bond. As throughout the periodic table, multiple bonds with s and p orbitals between atoms of the same element are magnitudes more stable in the second period than anywhere else due to much better p-orbital overlap (smaller size, smaller interatomic distance). Therefore, we can consider phosphorus, arsenic, antimony and bismuth more or less as similar while nitrogen is an odd one out.

Phosphorus has four stable allotropes with vastly different structures. The white phosphorus allotrope, $\ce{P4}$ molecules, basically falls into the same class as dinitrogen and melts at around 40 degrees. Red, purple and black phosphorus build up network-like structures in two dimensions, either in tube-like chains (red) or as ‘wavy graphite’ (black). Only the black modification is clearly defined. Red phosphorus has melting points of around $600~\mathrm{^\circ C}$ while black phosphorus sublimes in vacuum at $400~\mathrm{^\circ C}$ — probably meaning that its melting point at standard pressure is much higher, maybe even higher than arsenic’s sublimation point. I found no references to liquid phosphorus so I have no idea whether the bonds of the network structure need be broken to liquidify or not. 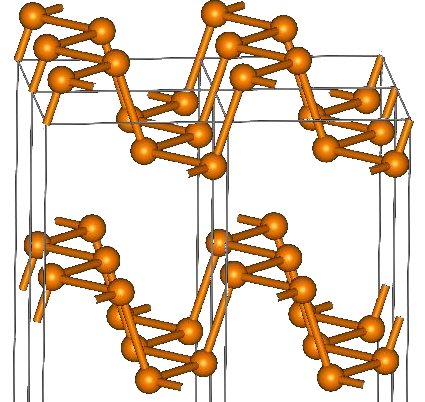 Henceforth, we have established a structure element which we will be sticking to with only moderate modifications. The transition phosphorus — arsenic — antimony — bismuth is more or less the non-metal—metal transition. What explicitly changes is the distance between the sheets as shown in table 1.

So while the phosphorus structure can be described well as consisting of semi-isolated sheets stacked above each other; when we have reached bismuth, these sheets are much closer to an overall three-dimensional network. Therefore, bismuth atoms are in a distorted octahedric environment as other metals would be. Arsenic, where the sheets are still well separated, exhibits almost metallic condictivity perpendicular to the sheets.

Putting this together and taking the extreme points, we can say:

The reason is that after arsenic, there is shielding. This causes the intermolecular forces to become weak. Thus, the melting point decreases. I hope you know about shielding of d and f electrons

Not the answer you're looking for? Browse other questions tagged periodic-trends melting-point boiling-point or ask your own question.

3
The melting and boiling point decreases down the group up to group 14 (not including transition metals), but the trend reverses from group 15. Why?