Estimation of the bond angle of water

We know from experimental data that $\ce{H-O-H}$ bond angle in water is approximately 104.5 degrees. If its two lone pairs were bonds (which is unfortunately impossible) also $\ce{O-H}$ bonds and a perfect tetrahedron resulted, then VSEPR theory would predict that the bond angle would be 109.5 degrees - this number can be easily derived using the geometry of a tetrahedron. However, how would people give estimates of the actual bonding angle of water, which is caused by a slightly greater repulsion by the lone pairs than there would be if they were bonds? What physics would be involved in the calculation? Thanks!

What physics would be involved in the calculation

That's a very good question. In many cases Coulson's Theorem can be used to relate bond angles to the hybridization indices of the bonds involved.

How can we use this approach to answer your question?

If we examine the case where the $\ce{O-H}$ bond is $\ce{sp^4}$ hybridized, we find from Coulson's Theorem that the $\ce{H-O-H}$ angle is predicted to be around 104.5°. So indeed, in agreement with our prediction, removing s-character from the oxygen $\ce{O-H}$ orbital gives rise to the observed bond angle.

For over 50 years students have been told that water is roughly $\ce{sp^3}$ hybridized. The general description is that there are two equivalent O-H sigma bonds and two equivalent lone pairs orbitals. The lone pair - lone pair repulsion is greater than the sigma bond - sigma bond repulsion, so the hybridization changes as described above and the lone pair-O-lone pair angle opens up slightly and the $\ce{H-O-H}$ angle closes down to the observed 104.5 degrees.

With the advent of photoelectron spectroscopy it was found that the two lone pairs in water were not equivalent (2 signals were observed for the lone pairs). Now, the hybridization of water is described as follows:

As you said, lone pairs result in slightly more repulsion than bonds, because the lone pairs themselves expand a little around the atom. Common practice that I've learned is just to subtract about 2.5 degrees from the bond angle for every lone pair. For instance, a molecule such as NCl3 has 4 negative charge centers, giving it a tetrahedral group geometry, but it has one lone pair, giving it bond angles of about 107 degrees. Following this pattern, water would have bond angles of about 104.5 degrees.

Here's a picture that sort of shows how the lone pairs expand, reducing the bond angles slightly. 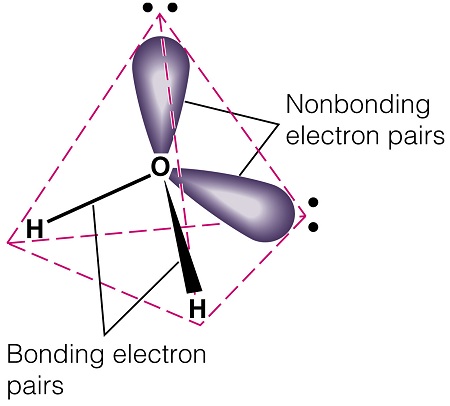 Not the answer you're looking for? Browse other questions tagged physical-chemistry water molecular-structure vsepr-theory or ask your own question.

4
VSEPR theory, chemical bond and quantum mechanics
5
Is hybridization of the cyclopropyl anion sp5?
-1
Hybridization in Oxygen and Nitrogen
1
Bond angles in a oxonium cation

1
Relation between various bond angles of Nitrogen compounds
2
Is the VSEPR theory correct in determining the bond angle of sulfur dioxide?
4
VSEPR theory, chemical bond and quantum mechanics
3
What is the CNC bond angle in methyl isocyanate?
2
Why is the molecular structure of water bent?
3
Comparing bond angles in carbonyl dichloride and carbonyl dibromide
4
Molecular geometry of BaH2 according to VSEPR theory