Why is the acylium ion stable?

Why is the acylium ion stable? Doesn't the inductive effect of oxygen destabilize it? Compared to an alkyl cation, is an acylium ion more stable or less stable?

organic-chemistry stability carbocation
Share
Improve this question
edited May 8 '18 at 9:45

The acylium ion is stabilized by the positive mesomeric effect of the lone pair of electrons on the oxygen atom onto the empty p-orbital of the $\ce{C+}$. This helps achieve octet completion of the carbon atom, and thus imparts stability to the carbocation. 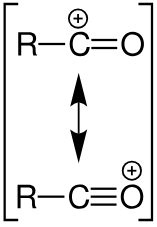 An alkyl carbocation has no such positive stabilizing mesomeric effect, rather only hyperconjugative effects, which are not able to provide as much stability as is possible in the acylium ion.

In addition to what Gaurang already wrote, I would like to add another, not quite as popular, interpretation.

This should of course highlight the linear coordination of the carbon, and the importance of the two π bonds. Furthermore depending on $\ce{R}$ there will be additional stabilisation via hyperconjugation, and/ or conjugation.
A bent structure (as it is often depicted in the literature) of acylium ions is not stable, and does only exist as a transition or excited state.