Regarding the complex $\ce{[RuH2(CO)(PPh3)3]}$, there are three possible octahedral stereochemical configurations,

a) Draw these isomers indicating which, if any, are chiral and identify the spin systems in each case

c) Sketch the expected appearance of the $\ce{^1H}$ spectra 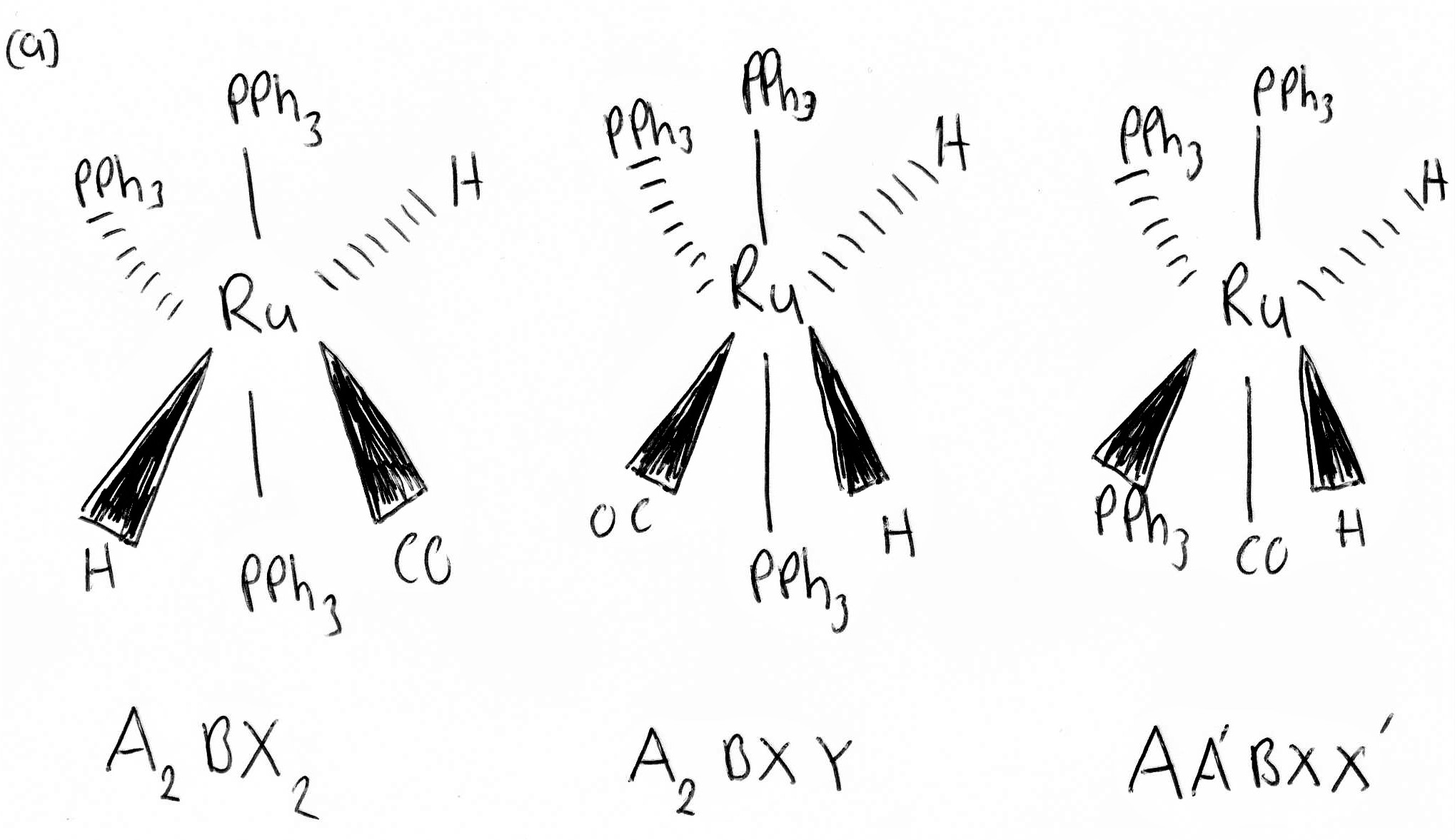 Let’s call the isomers mer-trans, mer-cis and fac from left to right for easier addressing.

What you didn’t indicate yet is which symmetry elements the different ones have and if they are chiral; this is helpful in determining the look of the NMR spectra because it helps us identify enantiotopic and homotopic atoms which give identical spins. The mer-trans isomer is clearly the one with the highest degree of symmetry: I judge its point group to be $C_\mathrm{2v}$. The other two should be $C_\mathrm{s}$, if I did the looking correctly.

With our sets of chemically equivalent or non-equivalent atoms in hand — to check: I arrived at sets of 1, 1 and 2 hydrogens and always two phosphorus; in one phosphorus set we have a pair chemically equivalent atoms, the other two contain a pair of enantiotopic ones — we can predict the look of the spectra and what will couple to what. Note that the $\ce{^{31}P\{^1H\}}$ spectrum will not contain any couplings to hydrogen atoms.

Retroactively assinging proton spin systems, I get $\ce{AX, A2}$ and $\ce{AA'}$; for phosphorus I arrive at $\ce{AX2, AA'X}$ and $\ce{AX2}$, again in no particular order for all six spin systems (i.e. you would still need to assign them to the correct structures). If you wish to combine the spin systems into one entire one per structure, use $\ce{M}$ rather than $\ce{A}$ in the hydrogen ones (or $\ce{K}$ and $\ce{R}$ instead of the hydrogen $\ce{AX}$). Note however that I am terrible at spin systems and that you should take those with a grain of salt.

Not the answer you're looking for? Browse other questions tagged inorganic-chemistry coordination-compounds nmr-spectroscopy or ask your own question.