Ask Question
Asked 5 years ago
Active 5 years ago
Viewed 636 times
4
$\begingroup$
Closed. This question needs to be more focused. It is not currently accepting answers.

So I have a few dumb questions. I'm still in high school and am doing something on magnetic properties of transition metals. I'm facing a few roadblocks.

2) If they're not, how do they bond with halogens like $\ce{Cl}$ or ligands like $\ce{OH/CN}$? Is it similar to ligand interaction and d-orbital splitting?

3) If they're neither complex ions nor have split d-orbitals, what determines their magnetic properties?

I'm having a bit of trouble finding the answers. I'm very new to this whole transition metal thing. On some websites compounds like ferrous bromide is considered a and on another it's b. I'd appreciate any help!

In a lot of cases, especially if we are talking about large anions with low charge density, such as nitrate and perchlorate, and moderately small cations, like $\ce{Co(II)}$, obtaining an anhydrous salt is a long, tiring quest, if possible at all. For example, anhydrous metal nitrates for small cations in general are obtained in anhydrous solvents only.

In case we are talking about medium anion with moderate charge density, like $\ce{Cl-}$ and the cation binds with its neighborhood strongly, like $\ce{Cr^{3+}}$, a lot of structures with different hydration degree may be obtained, such as $\ce{[Cr(H2O)3Cl3], [Cr(H2O)4Cl2]Cl, [Cr(H2O)5Cl]Cl2, [Cr(H2O)6]Cl3}$ in addition to anhydrous form $\ce{CrCl3}$ (and again, obtaining the anhydrous salt from water solutions is virtually impossible)

Sometimes a salt is unsolvable in water. This typically means that it is anhydrous, like silver halides and many sulfides, or at least low-hydrated, like $\ce{Cu(CH3COO)2\cdot H2O}$

In some cases a salt may have even more weird structure. For example, $\ce{MoCl2}$ actually contains $\ce{[Mo6Cl8]^{4+}}$ unit with $\ce{Mo}$ atoms forming an octanedron and $\ce{Cl}$ atoms occupying positions on top of each of the octahedron's faces. This unit is rather stable and the remaining chlorine my be exchanged with the unit intact.

Similarly, a series of oxoacetates is known, built around $\ce{M3O}$ unit. And so on....

Unfortunately, most transition metals are rather unique. There is a strong vertical similarity between second and third rows of d-elements, but even it is not perfect.

If they're not, how do they bond with halogens like Cl or ligands like OH/CN? Is it similar to ligand interaction and d-orbital splitting?

If they're neither complex ions nor have split d-orbitals, what determines their magnetic properties?

d-orbital splitting happens for any atom with said orbtials in neighborhood with symmetry below spherical, i.e. in all chemically viable cases.

Whenever you are looking at a substance that contains a transition metal you are always looking at some kind of coordination compound and the d-orbitals will split in some way. Generally, all chemistry with transition metals should be discussed with d-orbitals first and other things brought into consideration later. (The same is true for non-transition metals except for the d-orbitals part: They, too, will form complexes of some sort to stabilise their negative charges. However, their ions are usually if not always diamagnetic so do not contribute to magnetism.)

Finding out what an exact case is, is non-trivial. Let’s take chromium(II) acetate monohydrate $\ce{Cr(CH3COO)2 . H2O}$. We first need to find out how many d-electrons are present altogether. Since we have chromium(II) and chromium is in the 6th group, we arrive at $\mathrm{3d^4, 4s^0}$. (General rule: Empty the higher s-orbital immediately, if you haven’t yet reached the charge, remove from the d-orbitals.) $\mathrm{d^4}$ means that all four electrons could pair up for certain d-orbital splittings but they also could form a high-spin complex with four unpaired electrons or a low-spin one with two (see figure 2 below). We next need to know about the structure. Searching on Wikipedia, we find the following image (figure 1): 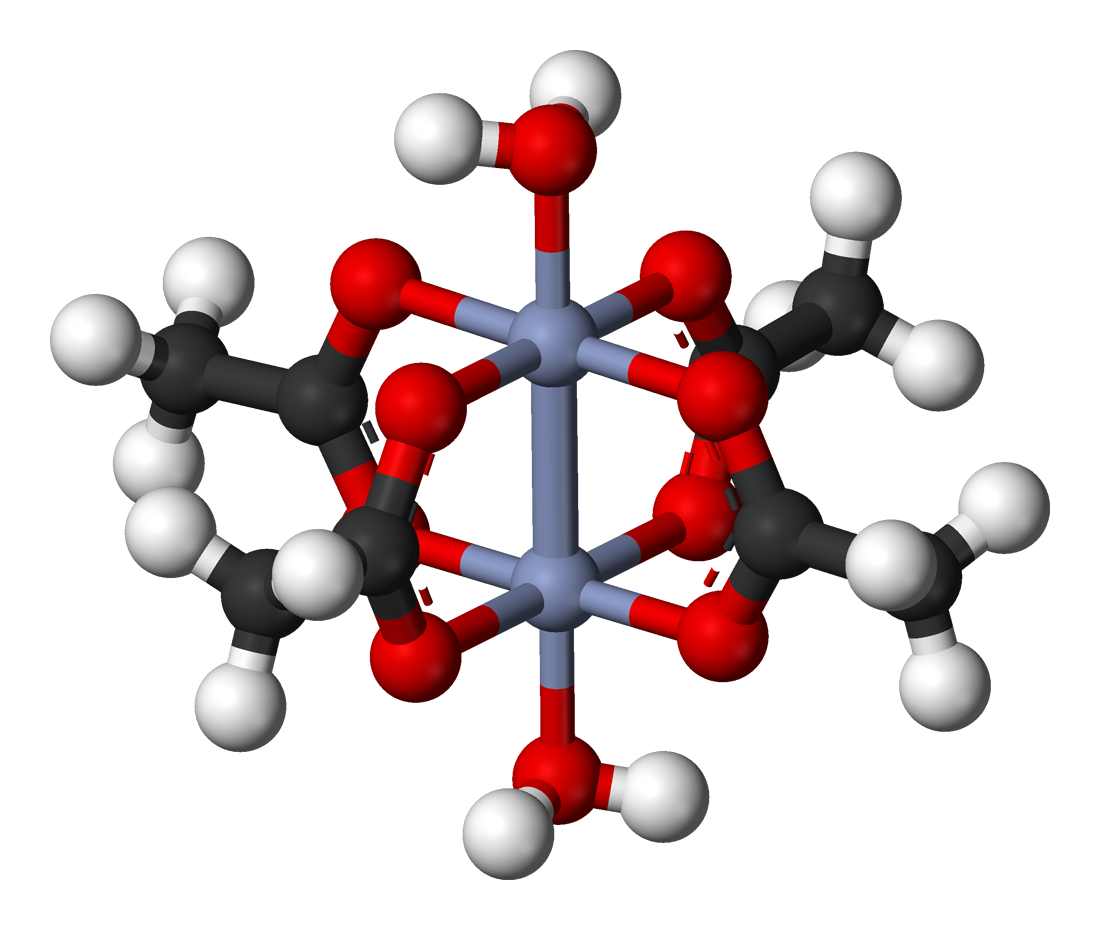 Our ligands (acetate and water) are low-field ligands, thus the picture in the complex is better described by the middle, high-spin splitting than by the right-hand, low-spin one. We could stop here and assume chromium(II) acetate to be paramagnetic and thus, maybe magnetic, depending on whether it exhibits ferromagnetic, ferrimagnetic or antiferromagnetic coupling. But we shouldn’t. Because if we measure this complex we find it to be diamagnetic. Erm, what happened? Well, you see a chromium-chromium bond between the two metals in figure 1. In the end, it turns out, that the unpaired electrons make up a quadruple bond. If we assume the $z$-axis to be along the chromium-chromium axis we get:

Every bond pairs up a single electron of the original paramagnetic chromium(II) to give an overall diamagnetic state.

You realised how complex the analysis is for a seemingly simple compound. Most importantly, it is very hard if not impossible to deduce whether a compound will have magnetic property $x$ a priori — unless you arrive at the conclusion that there are no d-electrons and the metal must thus be diamagnetic.

In a nutshell, the answer to your questions are:

Unfortunately, there is no simple answer.

Not the answer you're looking for? Browse other questions tagged homework coordination-compounds transition-metals magnetism or ask your own question.