In the following link (three quarters down the page) it states that theoretically there should be a proportional relationship between the ionic radius and pKa of a hexaaqua metal complex (provided that the charge of each metal is the same).

The website's reasoning for this is that due to the smaller ionic radius, there is a smaller volume meaning that there is a greater charge density. Therefore this will cause a greater distorting effect on the electrons in the $\ce{O-H}$ bond. Hence this will enable the $\ce{H}$ to be deprotonated more easily, resulting in a lower pKa value.

However it later says that experimental data don't fit this relationship shown by one of the graphs in the website:

I was wondering if anyone here could provide a more in depth explanation on how ionic radius effect acidity which perhaps can explain why these metals don't follow this linear relationship.

To start off with, there are two graphs on the site you linked, the second one being this one:

I also went around and checked different crystal structures of hexaaquametal(II) complexes for their $\ce{M-O}$ bond length to see if that may have any influence. The results are:

On the lower end of this spectrum we find copper and chromium which indeed have rather low $\mathrm{p}K_\mathrm{a}$ values. This could be due to a shorter $\ce{M-O}$ bond meaning that the water molecules experience the charge stronger. (This is also why I favour the graph I put in this answer: It puts copper closer to ‘where it should be’ in ionic radii terms.)

A second thing to consider is the ligand field stabilisation enthalpy LFSE. This is strongest ($-12~\mathrm{Dq}$) for vanadium since that ion only has three electrons which all occupy the lower energy levels. This would mean that ligand exchange for $\ce{[V(H2O)6]^2+}$ is kinetically strongly inhibited especially for vanadium, since any loss of a ligand would need to overcome the stabilisation of $-12~\mathrm{Dq}$. Hence, the water molecules are strongly bound to vanadium and experience its charge all the time. On the other hand, copper has rather weakly bound ligands exemplified in how simple it is to create $\ce{[Cu(NH3)4(H2O)2]^2+}$, the deep blue tetraammincopper(II) complex.
(Note: I did not find any papers confirming or disputing this hypothesis, but I only spent a short time looking.)

Right after vanadium we encounter chromium. It only has an LFSE of $-6~\mathrm{Dq}$ — which is still pretty good, considering it all derives from unpaired electrons. Overall, I think this ion can be considered to be almost like vanadium(II) albeit a little smaller, with an extra electron and a shorter metal-water bond length which would explain its position.

Next up is manganese which looks as if it were the exception. But it actually isn’t. First off, its LFSE is $0$, thus water molecules can diffuse on and off as they see fit, therefore overall weakening the effect the ion’s charge has on them.

From iron onwards, we can again consider the water ligands bound slightly more tightly since there is again LFSE to be gained. However, remember that while the $\mathrm{t_{2g}}$ orbitals are non-bonding with respect to metal–ligand σ interactions, the $\mathrm{e_g}$ level is antibonding. We have a half-filled $\mathrm{e_g}$ level which will weaken the overall $\ce{M-O}$ bonds. This could not only explain the larger $\ce{M-O}$ distances of manganese and iron when compared to chromium but also their weaker acidity. (A weaker bond would also mean weaker charge transfer.) I suspect that this does not yet really matter for chromium due to its Jahn–Teller distortion being somehow favourable overall, and that chromium’s acidity stems from the closer water molecules.

From then on, the explanation seems rather simple, since the ion radii and the $\mathrm{p}K_\mathrm{a}$ are almost in a linear correlation. The question is how the ionic radii were deduced (which is none-trivial) and why they differ so strongly with the two sources the author of your linked site used.

I'll be honest. I don't completely know. So this is pure speculation. 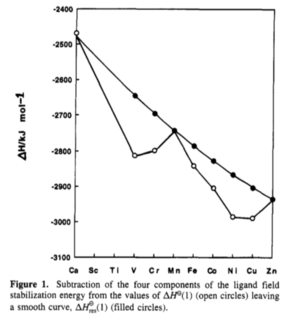 So if I were picking three transition metals that have high enthalpies of hydration relative to their LFSE, it's those three. In short, the water complexes are fairly stable, influencing the ability to pull a proton off the aqua ligands.

Not the answer you're looking for? Browse other questions tagged acid-base coordination-compounds transition-metals or ask your own question.

5
The Acidity of the Hydrated Iron (III) Ion
9
Inductive vs resonance effects and the acidity of phenol
3
Variation in atomic sizes in the transition elements
7
Why do transition metals form particularly stable complexes?
2
Which complexes are stable: ammine complexes or carbonyl complexes?
2
Stability by using charge/radius rule
0
How do I calculate the ensemble-average net charge of an amino acid at given pH?
2
Effective Bohr Radius in Transition Metal Complexes?