I've recently noticed that different sources on the internet and in books have different ideas of whcih atomic orbital influences which molecular orbital. In the diagram, where the lines connect the AO to the MO to show their influence, I noticed that in some of the MO diagrams, the $\mathrm{2p}$ orbital does not connect to the $\sigma_1$ orbital (the lowest in energy) and the $\mathrm{2s}$ orbital does not connect to the $\sigma_4$ orbital (the highest in energy). On the other hand, I also see the case where the opposite is true and they DO connect (this is the case for my own chemistry lecturer's notes).

I asked her if she could explain this difference, and she said that the $\sigma_1$ should have some $\mathrm{p}$ character and that the $\sigma_4$ should have some $\mathrm{s}$ character, so they do connect. She didn't however say that the other way was wrong. As a result I'm not sure whether the other way is wrong, or whether it's just like a difference in notation.

I hope someone can help clarify for me. I've attached two photos of the different cases. 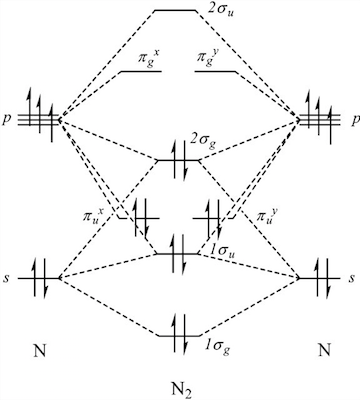 As molecular orbital diagrams are qualitative ways to understand bonding, there are different ways in which they may be drawn.

In the simplest possible cases, molecular oxygen (O=O), for instance, it is okay to assume that s-orbitals mix only with s-orbitals (of similar energy), and that the p-orbitals only mix with p-orbitals. This works fine for molecular oxygen, and explains many of its properties: double bond between O and O, paramagnetic etc.

In other cases, molecular nitrogen being the common example, this is not sufficient, and we have to account for orbitals mixing with orbitals of other kinds. This is called s-p mixing.

Firstly, you construct a MO diagram where orbitals of the same kind mix (the same as you would have done for oxygen), you then allow these MO's to interact with other MO's of the same symmetry to produce a new set of mixed orbitals. When the MO's interact in this way, they produce new MO's of higher and lower energy, which accounts for the different order of the MO's between diagrams where s-p mixing has been taken into account.

For more information about s-p mixing (and other kinds of orbital mixing) do a search here on stack exchange. There are plenty of other similar questions with answers to suit.