Has a carbon compound ever been found having an ionic bond?

Though it is highly unlikely, has any carbon compound been found to make an ionic bond and to exhibit ionic properties?

Why unlikely? Ionic compounds of carbon have been known for ages. There are ionic carbides ($\ce{Al4C3}$, $\ce{CaC2}$, etc.), graphite intercalation compounds like $\ce{KC8}$, ionic derivatives of fullerenes and more.

Come to think of it, common $\ce{CaCO3}$ is certainly ionic and at the same time a compound of carbon, but this is most likely not what you want.

There is also the classical case of the aromatic carbocations and carbanions; examples include tropylium bromide,

and sodium cyclopentadienide, which is used for preparing "sandwich compounds", among other uses.

Perhaps what you meant to ask was

Are there any known organic compounds with ionic bonds?

I think, what actually OP meant to ask is:

Are there any known organic compounds with carbon involving in an ionic bond?

The reason for my suggestion is the phrase "to make an ionic bond and to exhibit ionic properties" in OP's question, even though it did not describe the involvement of carbon. Otherwise, any ionic carbonate (e.g., $\ce{Na2CO3}$) or ionic cyanide (e.g., $\ce{NaCN}$) would qualify, none of which are not organic compounds.

Based on my suggestion tropylium bromide and sodium cyclopentadienide certainly qualify.

I think the best example is a compound containing triphenylmethyl cation (triphenylcarbenium or tritylium) and a non-nucleophilic anion (which doesn't have a strong affinity for bonding to the electrophilic carbon). Such compounds are stable at room temperature and also commercially available $($e.g., triphenylmethyl tetrafluoroborate, $\ce{(C6H5)3C+ BF4-})$: 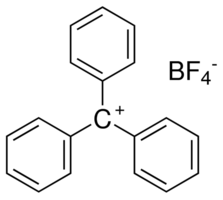 The title compound, $\ce{C19Cl15+.SbCl6-}$, consists of perchlorotriphenylcarbenium cations and hexachloroantimonate anions. The central $\ce{Sb}$ and $\ce{C}$ atoms occupy special position of symmetry 32 along the c axis. The cation shows a symmetrical propeller conformation. Four $\ce{Cl}$ atoms of the $\ce{SbCl6-}$ anion are disordered.

Not the answer you're looking for? Browse other questions tagged organic-chemistry ionic-compounds or ask your own question.

13
Is pyrite (FeS₂) an ionic or a covalent compound?
4
Can an organic compound have an ionic bond?
1
Why are electrons transferred in an ionic bond?
3
Can carbon and titanium form an ionic bond?
3
Why triiodide ion does not form ionic bond with cation having +2 charge?
2
Determining which compound is more 'ionic'