Oxidation state of ions in a unit cell

Given that $\ce{Al2O3}$ is face-centered cubic (cubic-closest packed) with respect to oxide anions, I am instructed to find the oxidation state of each aluminum ion "fragment" in the unit cell.

Let's suppose that the picture above is of $\ce{Al2O3}$ and not $\ce{NaCl}$. The larger oxide ions are green; the smaller aluminum cations are purple.

There are a total of 4 oxide ions in a unit cell, and a total of 3 aluminum ions in the unit cell.

Given that 4 oxide ions impart a charge of -8, and that a unit cell must be neutral, then each of the "three" aluminum ions must have an oxidation state of +8/3 in the unit cell, correct?

I cannot find any textbook discussing the oxidation states of atoms in unit cells ... so I am at a loss at whether my work is correct or not.

This is a really weird question.

Let's say, hypothetically, you had 3 cations and need a +8 charge to balance out the anions. That tells me there are two +3 cations and a +3 cation somewhere. The average is +8/3 but I need to assign formal charges as integers. 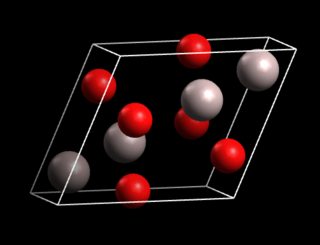 Here, you would do the same thing - count up the number of Al and O atoms per unit cell, considering the fractional volume of the atoms inside the unit cell. It's a bit trickier, since the volumes aren't as obvious as the FCC case.

This question is about $\gamma$-alumina 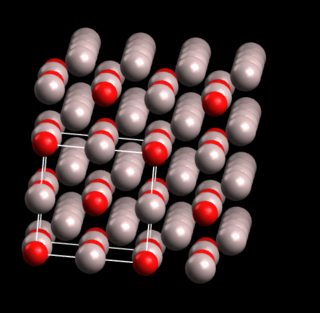 Notice that the oxygen atoms actually form an FCC lattice. I have an oxygen at each corner of the unit cell, and one in the middle of each face. So that's 4 oxygen atoms per unit cell = +8 charge from the anions.

How many Al atoms are there? 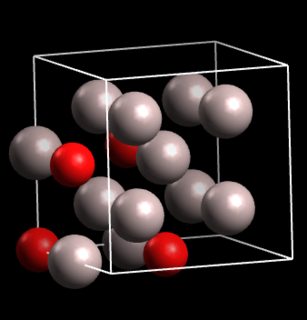 So that's an average oxidation state of +1 per Al...

1
Oxidation state of iron ions in a unit cell