Why does Soda Pop after Shaking

Why does shaking a soda can and opening it make the soda jump out of the can?

Soda drinks are carbonated meaning that carbon dioxide is dissolve into it. When carbon dioxide dissolves, the following reaction occurs: $$\ce{CO2(g) + H2O(l)~ \leftrightharpoons ~H2CO3(aq)}$$ As you can see, carbonic acid (a weak acid) is formed. It this which is responsible for the 'fizziness' of the drink.

Note that this reaction is in equilibrium, meaning that not all of the carbon dioxide dissolve to form carbonic acid, but only a certain percentage actually dissolves. Usually, the percentage of carbon dioxide that is dissolved is constant, however this can be changed by doing certain things to the system.

For example, by decreasing the pressure the equilibrium will shift to the left, meaning that the percentage of carbon dioxide that is dissolved will decrease. This will result in an increase of gaseous carbon dioxide in the bottle. This reason for this is explained by the Le Chatelier's principle. You can also imagine it as a piston pushing the gas into the liquid as shown in the below image. Image (a) is at low pressure while image (b) is at high pressure. 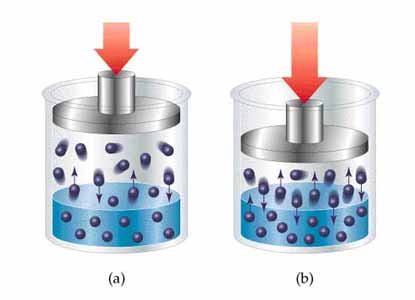 However if you were to shake a soda can and then wait a while before opening it, it most likely just create the normal pfffftt sound. This is because you give the system some time to go back to its original equilibrium position, meaning that some of the carbon dioxide gas will redissolve back into the solution .

Soda or other cool drinks like Coke, Pepsi etc. contain water along with dissolved carbon dioxide (aerated). Since the solubility of carbon dioxide increases with increase in pressure (Henry's law), the Soda is bottled under pressures higher than the atmospheric pressure.

When we open the soda bottles or cans, the pressure drops again to atmospheric pressure and the dissolved carbon dioxide will escape out into the surroundings. It occurs all of sudden so that soda will jump out with fizz. The scenario will be even more worse if we shake the bottle before opening due to thrust created. Remember that soda can be referenced as carbonic acid, H2CO3. For more information see carbonate and bicarbonate chemistry.

Not the answer you're looking for? Browse other questions tagged everyday-chemistry equilibrium or ask your own question.

27
Why does ice cream make soda fizz?
3
Difference between baking soda and baking powder
5
Why does pouring soda slowly and smoothly seem to keep more of the carbonation?
62
Why does shaking a match put the fire out?
3
Why does soda explode if artificial sweetener or other powders are added?
4
Using baking soda paste (alkaline) to "neutralize" honeybee venom (acidic). Is this scientifically sound?
2
Keeping an open, partially empty soda bottle bubbly longer
4
Simple every-day-item hydrometer for distinguishing regular soda and diet sodas
1
Does carbonation permanently increase the acidity of soda water?