Why does this reaction not proceed by sn1/sn2?

this is an assignment question but I'm stumped. 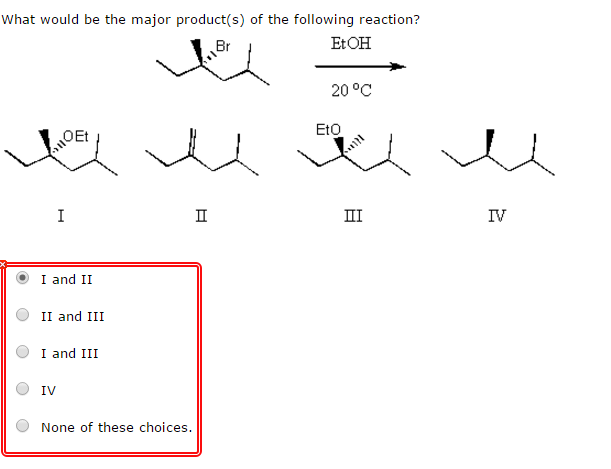 we have a polar protic solvent (also a weak base) interacting with the secondary carbon -- it looks like a good example of an sn1/sn2 to me. So why wouldn't the answer be "I and III"?

The major reasons I would give for going with the SN1 products are:

I also agree with orthocresol that product II is strange. I would expect by Zaitsev's rule that the new pi bond would form across carbons 3 and 4 in the main chain since his rule says that typically, the elimination occurs by acquiring a proton from the carbon with fewer protons, forming typically the more substituted alkene.

7
Synthesis via Sn2/Sn1, E2, E1: Choice of solvent
12
Will this beta-branched secondary alkyl halide undergo SN1 or SN2?
0
Strong Base combined with Sp2 carbons in Nucleophilic Substitution and Beta-Elimination Reactions
1
Solvents in substitution reactions
1
major products of this reaction?
3
Distinguishing among SN2/SN1/E1/E2 for a secondary bromide
1
How to determine if a reaction proceeds via SN1, SN2, E1 or E2 mechanism?
3
Does isopropyl chloride undergo SN1 or SN2 with sodium acetate?
4
Why do polar aprotic solvents favour SN2 over E2?