Take a look at the wavefunctions for the different energy levels of a simple harmonic oscillator (a crude approximation for a diatomic). 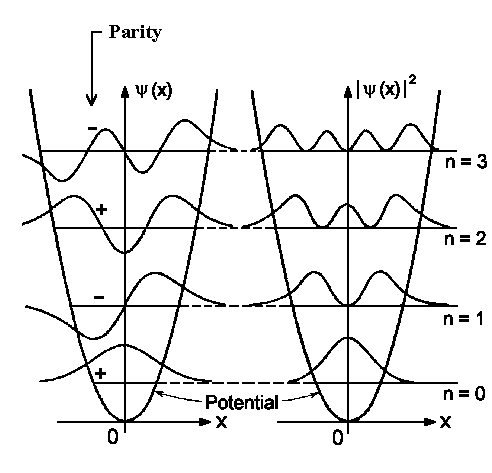 The wavefunctions seem to make sense: they tend to zero as x tends to plus or minus infinity so it is normalisable. The number of nodes increases by one with increasing energy levels etc.

However, when you take a look at $|\psi(x)|^2$ which represents the probability density of the particle to be found at that point in space (or the diatomic to be in that particular state/bond length) I struggle to see how a node can exist. This is because a diatomic will stretch and contract through the full range of extension/contraction - the quantum representation does not seem to conflict this in the sense that there is a non zero probability when the potential is equal to the total energy. However, to reach this state from, for example, $x=0$ in the $n=2$ energy level it must pass through a node. What does this mean? surely a bond can't cease to exist as it stretches from equilibrium to some extended or contracted state? What's really going on here?

However, to reach this state from, for example, x=0 in the n=2 energy level it must pass through a node.

To start, ask yourself: "What should pass through a node?" The answer is: it is the probability that "passes through the nodes", not atoms (or, I should better even say nuclei). Probability is just a mathematical quantity ant the zero value is allowed for it, so there is nothing to worry about. Yes, quantum harmonic oscillator has some forbidden regions of displacement from the equilibrium. But it can also penetrate into classically forbidden regions. Quantum world is weird.

The root of this (and most of the other) apparent quantum paradoxes is the classical way of thinking: you think that you have some funky quantum balls on a funky quantum spring out there, but you don't. Quantum harmonic oscillator is a quantum system that essentially has the Hamiltonian similar in its form to the Hamiltonian of a classical harmonic oscillator. And this is it. No balls, no springs, just a similar Hamiltonian.

The conception of moving nuclei in a harmonic motion is simply wrong. At best, it shows what geometries are possible for a given mode but don't think that molecules move like this.

The $|\Psi(x)|^2dx$ tells you what the probability is to find your geometry at displacement $x$. Forget get the idea of the moving nuclei, this idea is just a simple concept to visualize normal modes but it is not suitable for quantitative assessments.

Nodes also don't mean that your molecule can't pass through that point. Generally you can never measure a single point, meaning it is impossible to measure your geometry exactly. You always have some uncertainty in your measurement apparatus which means that you always measure a range of x-values and the probability around a node does not vanish as soon as you look at small interval for x around your node.

There is one case when the approximation of a vibrating molecule is acceptable and that is for highly excited vibrational states. These states give probability distributions which are similar to classical harmonic oscillator motion. But even then it is still an approximation and you still have nodes. But the "motion" of harmonic oscillator groundstates and lower states is nothing like the classical motion.

Not the answer you're looking for? Browse other questions tagged physical-chemistry quantum-chemistry or ask your own question.

4
Please explain the following graph for a quantum mechanical harmonic oscillator
12
How do Electrons Cross Nodes in Orbitals?
3
What are the physical manifestations of radial nodes?
10
Why is the expectation value of Hermitian conjugate operators $RR^\dagger$ always real and non-negative?
6
Why do solutions of electron in a box (and in a ring) predict coefficients for LCAO (linear combination of atomic orbitals) in 1D systems?
5
Oscillation of particle in harmonic oscillator