Why does soup turn purple when lemon juice and salt are added?

Well you have probably heard about salpeter. I don't know if it is a myth or not that it is used to reduce men's libido by adding to food especially in boarding schools and remote military campuses.

I didn't know that before but because I studied at boarding school, this topic and its alleged test intrigued me. According to the test, when you add lemon juice and salt to food and if the salt in the food turns to purple/blue, it means salpeter is added to the food. I don't know if it is scientifically proven.

Now I live with my parents but just for fun I wanted to try to test on my homemade food and I shocked because the salt I added to the soup, which was made by mom, turned to be purple /blue. I've become really baffled and I checked if there is any salpeter in cupboards I found a bottle of white like flour thing. I presumed it was powdered salpeter and tested it with the same method, which I added lemon juice and salt and it turned blue/purple.

But when I asked what that white thing is, she said it was "powdered sugar". and I tried the same test on new powdered sugar yeah it turned to be blue too.

I hope you are not confused. So far what I am sure about is that when I add salt and lemon juice to powdered sugar it turns to be blue.

My mom said there is neither salpeter nor powered sugar in the soup she made.

Buy how come does soup turn to be blue /purple when I added some lemon juice and a lot of salt?

Here is a picture.The soup is made of lentil, some spices and salt, some potato and carrot. 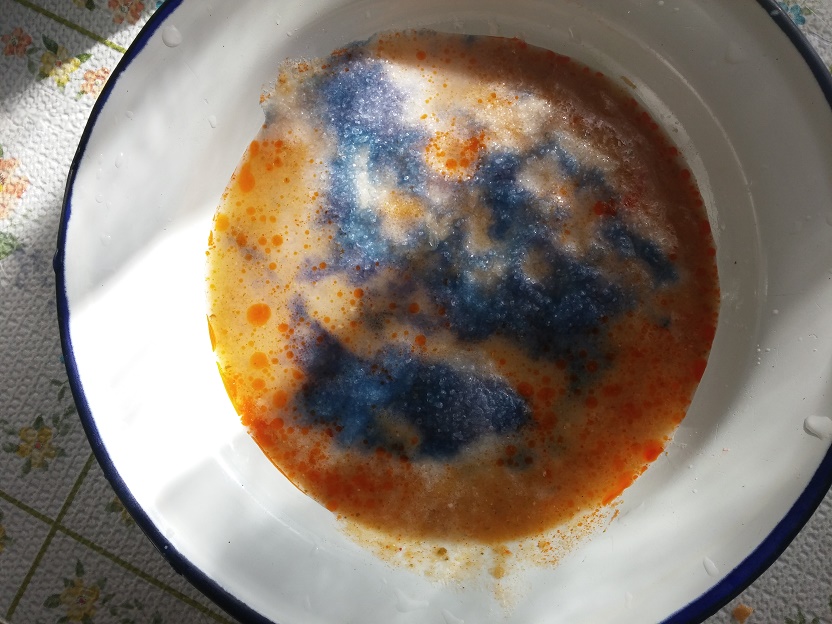 A possible answer: (1) Common table salt is usually "iodized" - i.e. it contains potassium iodide. (2) Something in the soup could oxidize the iodide to elemental iodine. (3) Iodine plus starch (from the potato in the soup) gives a deep blue color.

23
How does adding lemon juice to sugar make better caramel?
0
Cooking with vinegar and lemon juice (Carpaccio)
5
Does adding lemon juice to water chemically alter its nutrients and thereby negating any of its health benefits?
3
Why does soda explode if artificial sweetener or other powders are added?
27
Why does lemon juice reduce the "fish" odor of sea food — specifically fish?
2
Is there a way to create natural Red food coloring from Turmeric in the house kitchen?
8
Why do purple Pedialyte freezer pops turn green when frozen?