Problem
A synthesis of azetidine is shown below. Provide a mechanism for all the steps. Why does the formation of azetidine in the last step require high temperature? 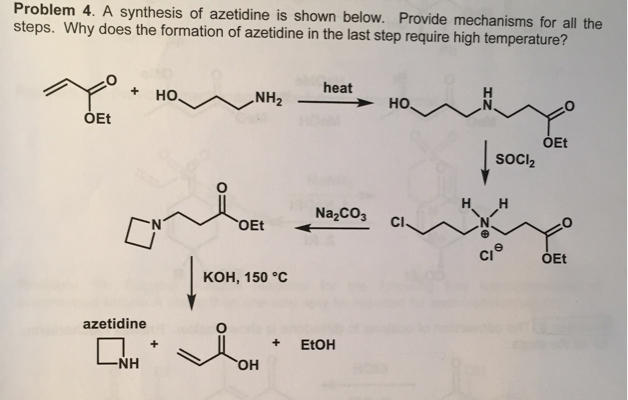 My working is thus: 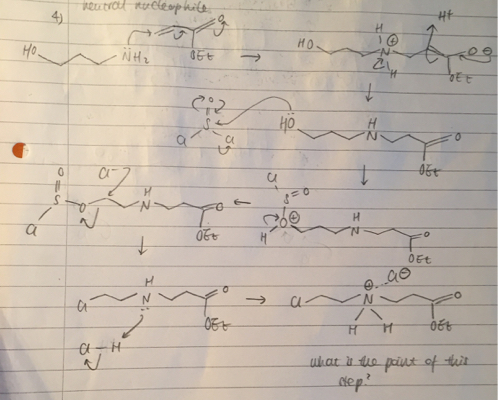 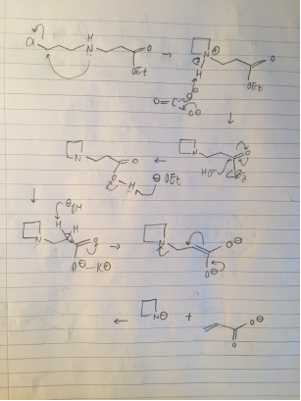 I am stuck on the last step and my version seems wrong. Can someone please guide me in the right direction?

There is not much to say other than: your version is more or less correct. It is debateable whether the ester hydrolysis happens before or after the cleavage of azetidine (I would suspect before due to the lower overall charge). Remember that you always have to consider aquaeous work-up at the end of a reaction, which will give you the three protons you need to regenerate acrylic acid, ethanol and azetidine.

You also have another question written on your paper after the halogenation of the terminal alcohol, namely:

What is the point of this step?

11
Reverse Friedel-Crafts mechanism
4
Elucidating reaction mechanism and purpose
6
Molecular Structure of Caffeine
6
Synthesis of diclofenac
5
How this tricky Wagner-Meerwein rearrangement occurs?
8
On the mechanism of the nitrogen-removal step of the Wharton olefin synthesis
1
Deuteration of enone - mechanism?
1
Can some one please explain alkyl shifts for me
3
Is Pinacol rearrangement the source for the ring expansion?