How is the Felkin-Anh model of stereoinduction correctly explained with MO theory?

One method to predict stereoinduction in asymmetric reactions is the Felkin-Anh model (derived from the more basic Cram model) that applies to nucleophile attacks on α-chiral aldehydes. In a simple case such as (S)-2,3,3-trimethylbutanal, assignment of large, medium and small residues is trivial and we predict nucleophile attack as indicated in scheme 1 to generate (2R,3S)-2-hydroxy-3,4,4-trimethylpentanenitrile. 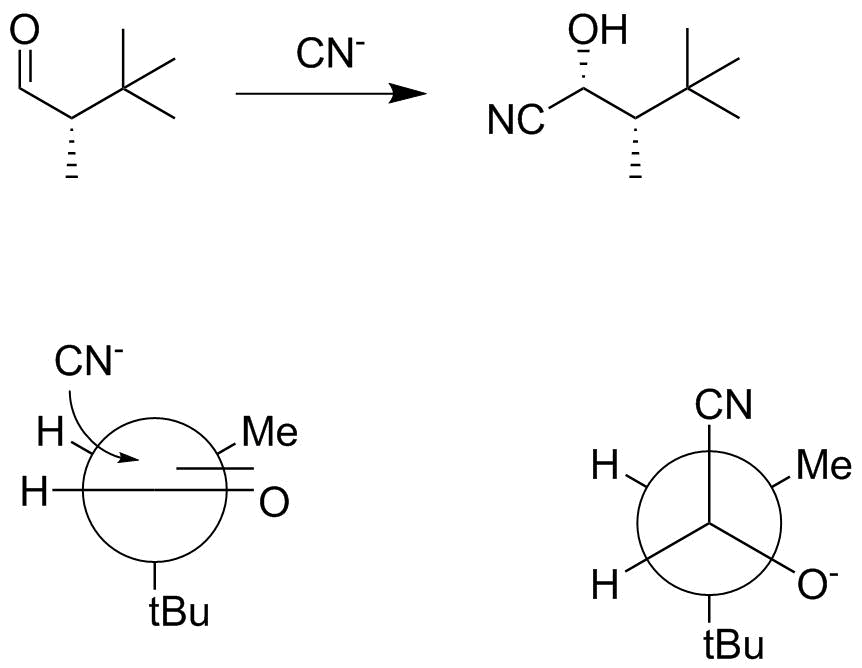 In some cases — I was taught ‘in cases of a group with high electronegativity on the α-carbon’ — we may no longer consider simply the size of the substituents but instead need to consider the electron-withdrawing substituent to be orthogonal to the carbonyl bond axis. Examples would be α-haloaldehydes, α-silyloxyaldehydes or α-aminoaldehydes as shown in scheme 2 with (S)-2-substituded butanal. 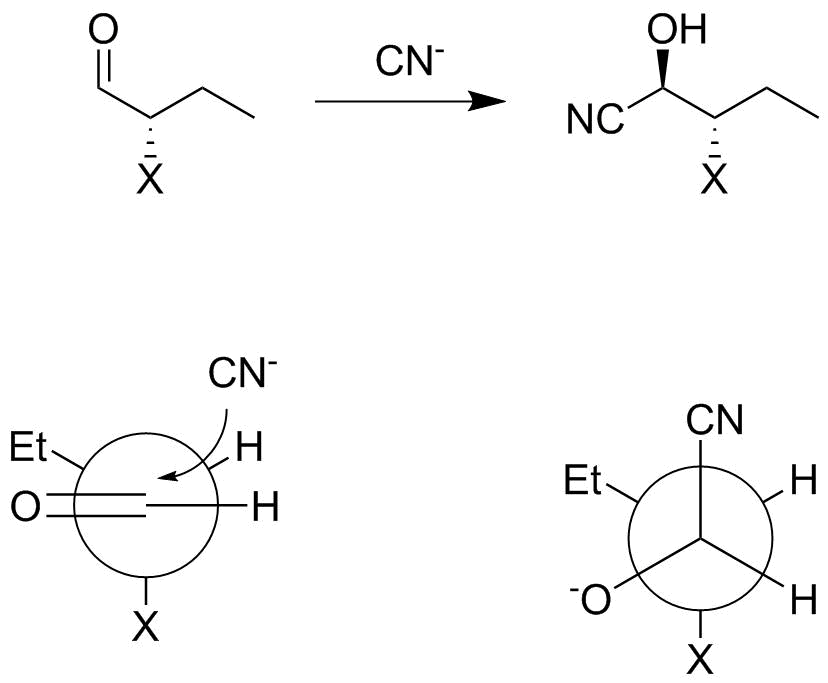 How is the Felkin-Anh model explained on a molecular orbital basis? Please include diagrams showing the orbitals involved and what exactly is being stabilised.

Also, if you can confirm (or unconfirm) my list of possible electron-withdrawing substituents, please do so in comments to the question.

From the organic chemistry textbook by Clayden, Warren, Wothers and Greeves on pp. 890-891:

The $\pi^{*}$(C=O) and $\sigma^{*}$(C–X) orbitals add together to form a new, lower-energy molecular orbital, more susceptible to nucleophilic attack. But, if X is not a leaving group, attack on this orbital will result not in nucleophilic substitution but in addition to the carbonyl group. Again, this effect will operate only when the C–X and C=O bonds are perpendicular so that the orbitals align correctly.

What does this mean for stereoselectivity? Conformations of the chiral carbonyl compound that place an electronegative atom perpendicular to the C=O bond will be more reactive-size doesn't matter.

In response to the requests specified in the bounty description:

As you probably know, the above treatment of the effect of one fragment orbital interacting with another one is basically just a pictorial way of applying perturbation theory to the problem. From this theory you get the result that the interaction strength of two fragment orbitals gets stronger the better the overlap and the closer the orbitals are in energy - a very(!) detailed derivation of the fundamental equations involved has been done by @Martin here (an answer he truly deserves much more upvotes for :)). Overlap will not be an issue, but the energy differences will be. So, when thinking about which orbital interactions are most important for the problem at hand we have to look at their supposed energy levels. Thus, I've done a rough sketch, taking into account that:

On the right side of the picture I added arrows indicating the energy differences between the most important orbitals. 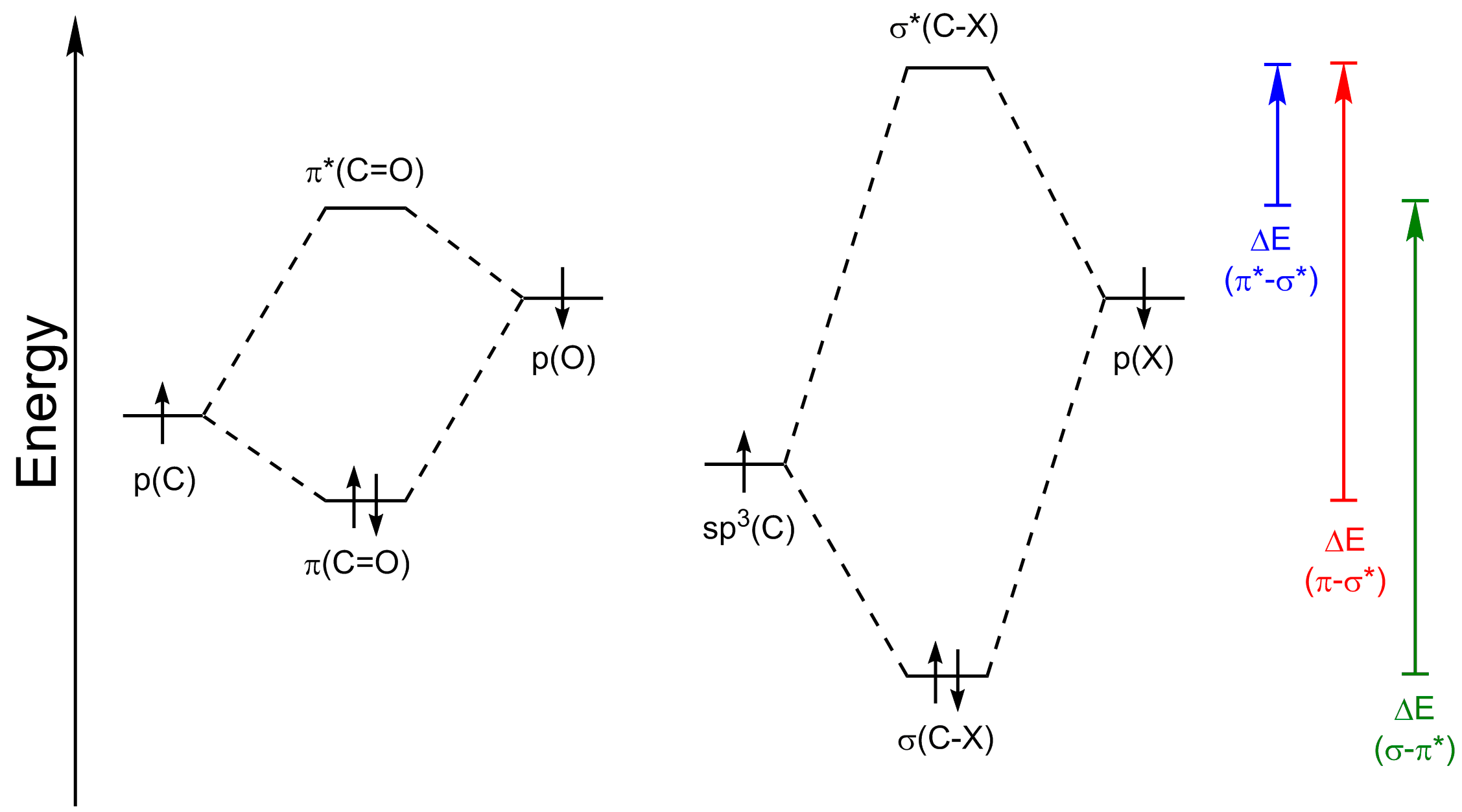 3) Shouldn't we better consider the entire thing as an allyl cation system?

The system at hand has much lower symmetry than the allyl cation because it consists of 3 different atoms/fragments. That makes drawing analogies between this and the simple pure carbon case difficult. It's certainly possible but the treatment shown in the book by Clayden is much easier. But even if you do a more rigorous perturbational treatment not only considering the first order interactions between $\pi^{*}(\ce{C=O})$ and $\sigma^{*}(\ce{C-X})$ but also the second order mixing of $\pi(\ce{C=O})$ (which in effect would be like doing something similar to the allyl cation) you get qualitatively the same picture as drawn above in the book by Clayden. Basically the only effect the mixing of $\pi(\ce{C=O})$ has is a slight down-shift in energy of the low-lying $\pi(\ce{C=O})$ orbital and a slight up-shift in energy of the new LUMO you get from Clayden's method, i.e. the bonding combination of $\pi^{*}(\ce{C=O})$ and $\sigma^{*}(\ce{C-X})$.

You could try to do calculations for the following molecule

whereby you do one calculation with the $\ce{F}$ of the $\ce{CH2F}$ group perpendicular to the $\ce{C=O}$ plane and one with one of the $\ce{H}$ atoms of said group in that position. Then you can compare the LUMOs of both conformers and see if the position of $\ce{F}$ atom actually has an energy-lowering effect.

The answer that doesn't invoke mixing of empty orbitals is given in Carey, Sundberg Advanced Organic Chemistry (X is a group capable of accepting a significant amount of electron density):

There is a stereoelectronic (hyperconjugation) effect, which involves the interaction between the approaching nucleophile and the LUMO of the carbonyl group. This orbital, which accepts the electrons of the incoming nucleophile, is stabilized when the $R_L$ group is perpendicular to the plane of the carbonyl group. This conformation permits a stabilizing interaction between the developing bond to the nucleophile and the antibonding sigma antibonding orbital associated with the C-$R_L$ bond. Because this is a sigma bonding-sigma antibonding interaction, it should increase in importance with the electron-acceptor capacity of X. 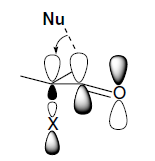 28
How to find the second order perturbation to wave function?
12
Why are alpha carbonyl halides most reactive towards SN2 reactions?
5
Effect of protecting group on diastereoselectivity of LiAlH4 reduction of α-hydroxyketones
0
How does chelation control result in rate acceleration?

20
How can the Bonding in IF7 be explained using LCAO method?
15
The effect of hyperconjugation on the stability of alkenes with MO theory
19
How can the gauche-effect be explained?
25
How can the intense color of potassium permanganate be explained with molecular orbital theory?
1
How to correctly write the condensed formula for salicylic acid
17
How to rationalise with MO theory that CO is a two-electron donor through carbon?
11
How is Bent's rule consistent with LCAO MO theory?
6
In the absence of a physical model, how can I use free software to visualize stereochemistry?
7
How does the MO-LCAO theory explain the direction of valence bonds?