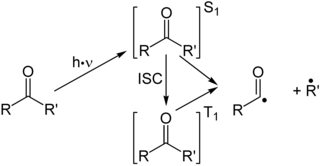 However, the really interesting photochemistry observed with beta, gamma-unsaturated ketones occurs from the triplet state and is known as the oxa-di-pi-methane rearrangement. The following figure (2) provides an example showing the "characteristic" 3-membered ring in the final product.

It is just the "oxo" analogue of the all-carbon photo di-pi-methane rearrangement.

Not the answer you're looking for? Browse other questions tagged carbonyl-compounds reference-request photochemistry or ask your own question.