Now I have a breaker which is containing $\ce{CH4}$ of some amount at standard conditions and then I put it on a burner. 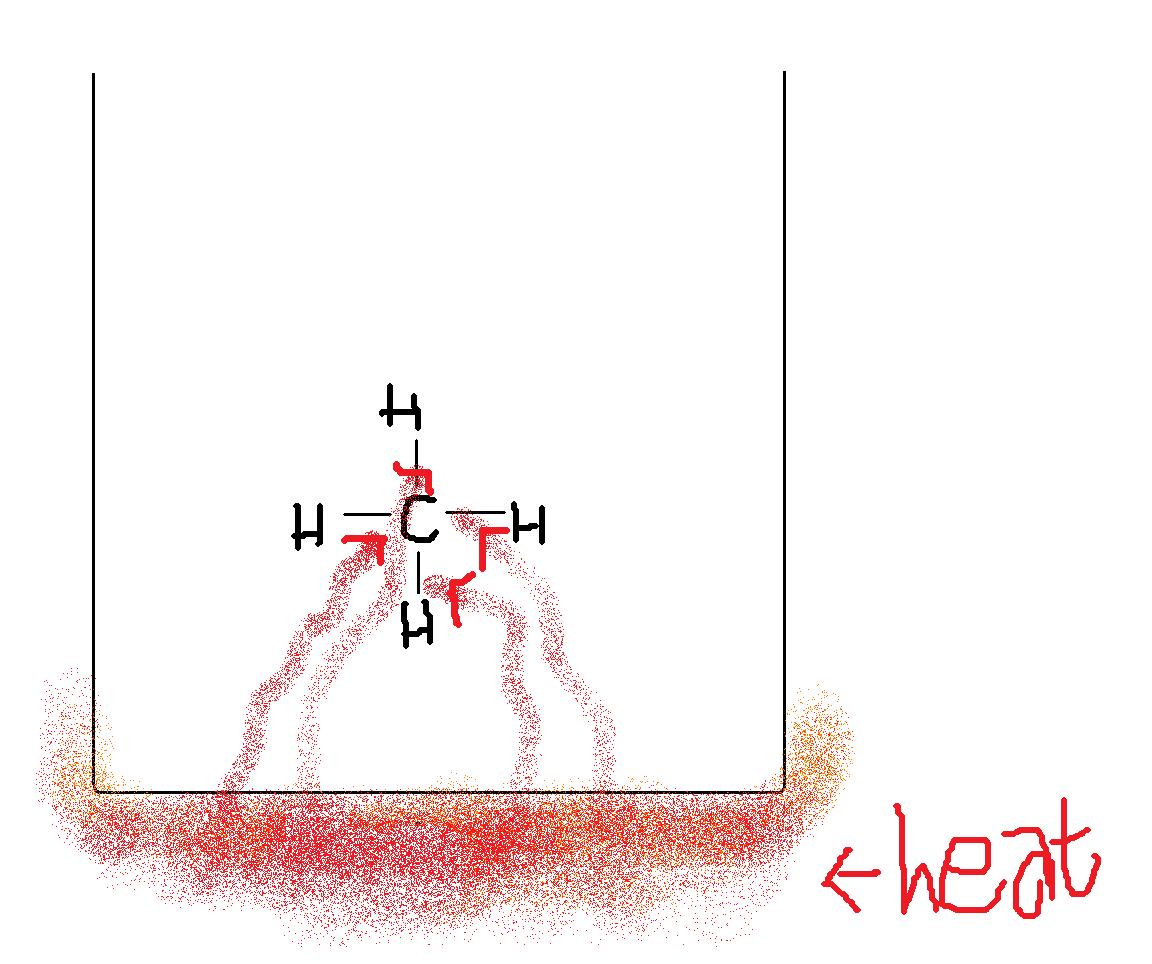 and now their bond enthalpy is the mean of all those numbers.

now going back to the diagram we heat up the beaker containing methane then the energy that is absorbed by any one of the $\ce{C-H}$ bond should be equal to the energy absorbed by the other $\ce{C-H}$ bond because all the bond in a molecule should absorb equal amount of energy at the same time because at time $t$ the temperature is same all over the beaker and all bonds are equal. so it should be like that while calculating the bond dissociation energy of a poly-atomic molecule (take the example of methane) calculate it like $4\times 427\ \mathrm{kJ\cdot mol^{-1}}$. (is this a common sense?)

all bonds Should broke up at once!

but we know that this does not happen, which means that all the bonds in a molecule does not absorb heat of equal amount at the same time or are they unequal? And fairly speaking it is painful to me to visualize this thing maybe because I am not able to understand this reality.

How do I comprehend this thing?

this do not happen so how to understand this thing?

You are making several assumptions that assume equilibrium conditions. In this sense all the bonds are equal: they are on average over time.

However, at a molecular level (one molecule at a time) this is not true especially if enough energy is being added to break some bonds. The energy distribution for each bond will be Boltzmann-Like so some bonds will have enough energy to break. Once broken, of course, the other bonds no longer are CH4 bonds but are CH3 bonds of some sort. Hence we would not expect the next dissociation energy to be the same as the first.

The critical idea here is that the thermodynamic quantities of bond dissociation are averages and at a molecular level the actual energy is distributed according to statistical rules: some atoms or some of their bonds have more energy than others. The reactions occur not when the average energy input is equal to the dissociation energy, but when a small number of bonds at the extremes of the distribution have enough energy.

This is a very important idea (called statistical thermodynamics) in understanding chemical reactions.

Not the answer you're looking for? Browse other questions tagged thermodynamics bond energy or ask your own question.

2
How to calculate the bond energy of C-Cl?
4
Calculating enthalpy change and energy required to convert lead sulphide to lead
4
Can the thermodynamic predictions of redox reactions based on E and dG contradict each other?
5
Difference between dissociation energy and dissociation temperature for water?
4
Temperature dependence of reaction enthalpy
5
Calculating internal energy of methane
2
Bond dissociation energy order for C−C, N−N, O−O and F−F single bonds