How many stereoisomers of 1-methylidene-2-(4,4,6-trimethylhepta-2,5-dien-1-yl)-1,2-dihydronaphthalene are there?

What is the total number of stereoisomer of this compound?

As there is only 1 chiral carbon, and 2 out of 4 C=C double bonds that contribute to geometric isomerism (cis/trans), I think there are 2^(1+2)=8 stereisomers. But the answer says 4. Can someone please explain the reasoning? Thanks!

organic-chemistry stereochemistry
Share
Improve this question
edited May 22 '21 at 18:55

The text is correct. You are partly correct about the alkenes, but mistakenly assume 1) all are stereocenters. 2, it is incorrect to assume that even if stereogenic, alkenes have two stereocenters simply because they have 2 carbons. What makes them stereogenic is that there are geometric differences relative between the two carbons. Thus stereogenicity comes from that relationship, not the number of carbons. 3) While everyone know what you mean by cis and trans, those are not acceptable terms in organic chemistry unless you are referring to sides of rings or in relative terms only.

Looking at just olefins and going from left to right:

Next, the endocyclic alkene must be cis. You cannot place an E olefin in a ring smaller than 8 eight carbons but that would make the name change...this is asking for configurational (stereo) isomers...not constitutional variants.

Next, the exocyclic alkene is terminal. It has two of the same group (H) on the a carbon, it is therefore not a stereogenic center. How do you know? Switch the two hydrogens...does anything change? no, so it can't be.

Next, the E-olefin next to the quaternary carbon is the only stereogenic alkene...it could be Z. So that is a stereocenter (both carbons are)...though that would be incredibly high energy (the largest substituents (and neopentyl is enormous) are sterically congested).

Finally, the last olefin double bond is not a stereocenter. There are two of the same group on one of the carbons. Transposing them changes nothing.

But we're not finished. There is a chiral center. Do you see it? The maximum and actual number of stereoisomers is two. 2^2 is 4, the answer is 4. Here they all are. 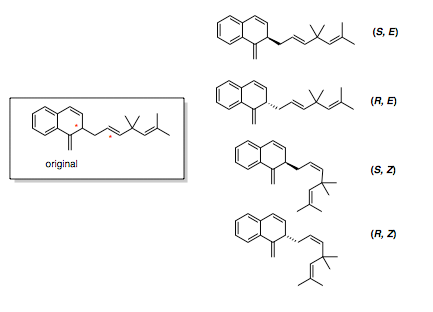