Why and how does carbon hybridize itself according to its need? [duplicate]

Sometimes carbon forms sp3 orbital and sometimes sp2 and sp. Also, carbon chains are more stable with sp3 orbitals. So, why and how does carbon hybridize itself to other orbitals? My question is more about stability. It's not about how it is significant to organic chemistry. For example, Methane which has 'sp3' orbitals is stable because of its sigma bonds. But, ethene, which has a pi bond is not stable and is more reactive than methane. So, why does carbon form this 'pi bond' while on the other hand has a better option of a sigma bond.

Hybridization is part of the language chemists use to speak to one another. When someone says that a carbon atom is $\ce{sp^2}$ hybridized, it's a shorthand way of telling others

So when someone says that a carbon atom is $\ce{sp^2}$ hybridized, they're really saying a lot more.

Using hybridization to describe an atom is similar to using VSEPR or MO theory to describe a molecule. Hybridization is just another way to try and describe reality; just like the other methods, often it works well, but sometimes it doesn't.

Also keep in mind that there is a continuum of hybridizations available to a molecule all the way from pure s to pure p with everything else in between.

Of course, we normally drop the "1" and the "0" superscripts and write those hybridizations as

As to how carbon (or any other element) "decides" which hybrization to use, it adopts the hybridization that produces the overall lowest energy for the molecule. Let's take the case of a carbocation. Suppose we start with an $\ce{sp^3}$ hybridized carbon in a molecule like $\ce{R_3C-I}$ and subject it to conditions where it ionizes to an $\ce{sp^2}$ hybridized carbocation and $\ce{I-}$. 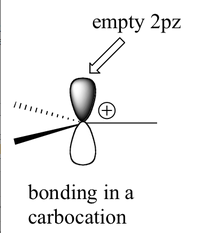 Your question is basically, why did the central carbon rehybridize from $\ce{sp^3}$ to $\ce{sp^2}$? The answer is, the ionized molecule (the carbocation) will reoptimize its geometry (rehybridize) in order to attain the lowest energy possible. In this example note that the carbocation p-orbital is empty - it contains no electrons. So why keep that orbital $\ce{sp^3}$ hybridized, why waste a part of a valuable, low-energy s-orbital in a bond with no electrons in it to stabilize? Instead, why not remove the s-character from the $\ce{sp^3}$ bond making it a pure p-orbital and mix that s-character into the other 3 orbitals (or bonds) to convert them from $\ce{sp^3}$ to $\ce{sp^2}$ thereby lowering the energies of the electrons that are in those 3 bonds. In fact, this rehybridization, or geometry reoptimization, is exactly what does occur in this reaction in order to stabilize the electrons as much as possible and produce a molecule (or ion) with the lowest possible energy.

7
Why does hybridization significantly matter for organic chemistry?

6
Is this textbook bonding picture of hybridization in ethene wrong?
3
What is lowest energy state, how does an atom gain it and what does it have to do with hybridization?
3
Draw a simplified MO diagram for the pi system of Methyl vinyl ether
11
Why are sp hybridized carbocations high energy?
3
How are electronic configurations including hybrid orbitals notated?
8
What is the hybridisation of CF3 free radical?
2
Do chemists use molecular orbital theory to explain physical characteristics of a compound (i.e. melting point, boiling point, etc)
1
Alkane free radical halogenation