It's often explained how $\ce{^14C}$ is formed in the upper atmosphere, a neutron hits a nitrogen atom and ejects a proton. Source. Since this is likely to happen to an $\ce{N2}$, I'm curious what the chemistry that follows is.

Does the energy of impact split the molecule, leaving a lone $\ce{^14C}$ and a lone $\ce{^14N}$ (and a lone hydrogen), (each highly eager to bond with something) or does it leave a $\ce{C-N}$ which might also readily bond with $\ce{O2}$ or maybe something else. I'm mostly curious what the immediate chemical reactions are after the $\ce{^14C}$ forms cause it seems to me that it should be initially pretty reactive.

wikipedia article cites: "After production in the upper atmosphere, the carbon-14 atoms react rapidly to form mostly (about 93%) 14CO (carbon monoxide), which subsequently oxidizes at a slower rate to form 14CO2, radioactive carbon dioxide. The gas mixes rapidly and becomes evenly distributed throughout the atmosphere (the mixing timescale in the order of weeks)."

The main reaction forming C-14 in the air is the reaction of N-14 with neutrons to form C-14.

I know that if fast neutrons from fission events are allowed to strike a nitrogen nucleous that a very high energy gamma photon (higher than 1.6 MeV) are emitted. Now if we consider for a moment the emission of a gamma photon. We must conserve momentum.

I have calculated the energy of the recoiling atom of C14 which would be for a moment inside a CN radical when the reaction occurs. Thus we will break the molecule up to form carbon atoms. 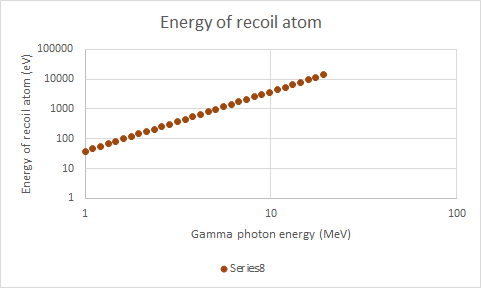 I imagine that a carbon atom will be able to react with oxygen with ease to form a carbon oxide.

Not the answer you're looking for? Browse other questions tagged atmospheric-chemistry or ask your own question.

17
Why does free chlorine in the stratosphere lose its ozone-depleting potential after about 100,000 reactions?
32
How much CO2 could you remove from the atmosphere with 2 trillion USD?
13
Why don't heavy and light gases separate in the atmosphere?
0
Where does the energy of solar radiation hitting the atmosphere go?
8
Is the hydrogenation of carbon dioxide to methane a solution or a problem?
7
If phosphorus trioxide is present in the atmosphere of Venus, could it not react with water to form (sufficient) phosphorous acid?