How many valence electrons do elements in the d block have?

I just noticed that on the periodic table it doesn't say how many valence electrons there are for each column in the d block.

How do I find out how many valence electrons elements in the d block have?

electronic-configuration transition-metals
Share
Improve this question
edited May 7 at 20:17

But it is wrong to apply the concept to determine the valency of the element, because that varies with the compound it is present in. For example, iron can show two valencies, $2$ and $3$ in the compunds iron(II) sulphate ($\ce{FeSO4}$) and iron(III) sulphate ($\ce{Fe2(SO4)3}$) respectively. But from the above definition, iron has $8$ valence electrons.

As a matter of fact, this applies even to many elements outside d-block too, for example chlorine typically shows a valency of ($-1$) in compunds like $\ce{NaCl}$, but it can also show a different valency (more appropriately, oxidation state) in ions like perchlorate anion ($\ce{ClO4^-}$), where its valency is $\mathbf 7$ (while the oxidation state is $\mathbf{+7}$, notice the difference that there is no plus or minus sign in valency).

Here is the list of Transition Metals and the generalized information about their valence electrons. The valence electrons (VE) are the electrons in the outer shell of an atom. In the above image valence electrons column imparts about the different orbits of an atom (But again this is a generalized rule there are some exceptions). So in order to find the valence electron you have to check the last digit of the series. at Comparisonofmetals.com you can compare and explore more about these metals with the help of various parameters like their various properties, facts, uses, periodic table details, etc. I came across this website while i was working on my science project. They have some unique and interesting features like comparison of metals, Metals Quiz, plot graphs, compare statistics and much more! I hope it will be helpful. 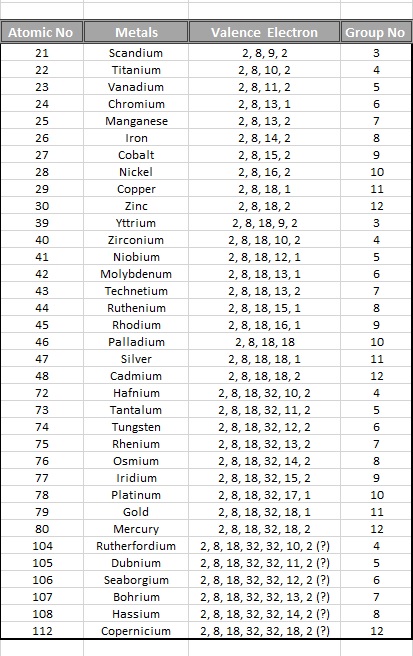 For example, Scandium metal's electrons per shell are 2, 8, 9, 2 and its outer shell has only 2 electrons. Hence, the valence electron count of scandium is 2.

d- block elements have 1-10 electrons in the d- shell. but the (n+1)th S outer shell has either 2 or 1 electron so as to complete half filled or full filled states of the elements which have one electron less than completion of that state.

Elements in the d block are transition elements, and each posses one or two valence electrons in their respective s orbitals. Most have two, with several notable exceptions: elements may "steal" an electron from the outermost s block and relocate it to the d block in order to reach a filled or half-filled ($5$ of $10$ electrons) state in the d block. These elements must be taken on a case-by-case basis.

6
Is scandium considered a transition metal?