What accounts for the high spin state of the complex Tris(acetylacetonato)iron(III)?

I understand that there's 5 d-electrons for $\ce{Fe^3+}$ ion, but why it doesn't fill up the lower energy orbitals first to form one unpaired electron, but rather, filling up all the orbitals to form 5 unpaired electrons? 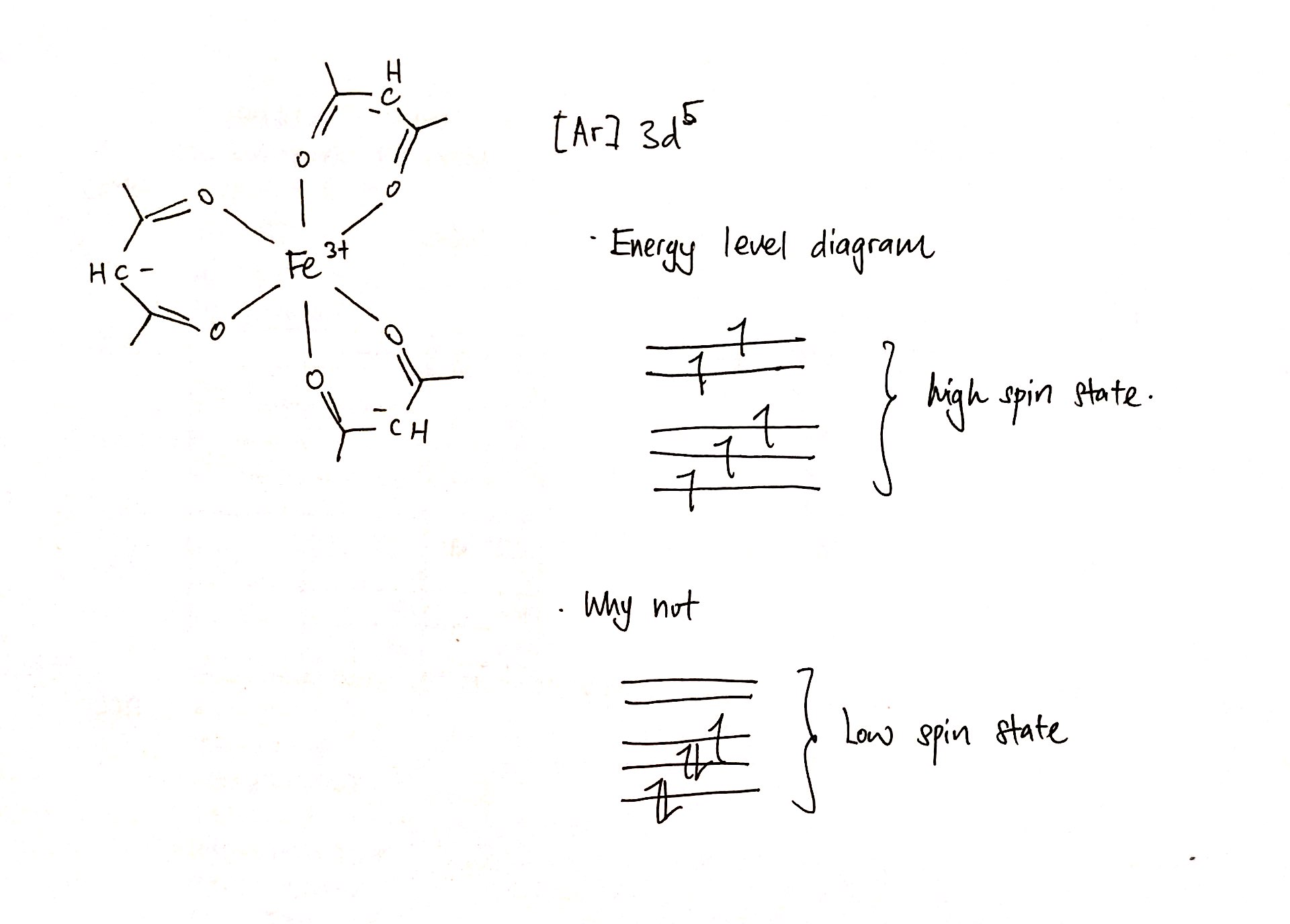 I am unsure how the ligands in this complex affects the crystal field splitting. Do we consider [acac] to be a weak field ligand? Could it be the geometry of this complex that give rise to high spin state?

I will go into the theoretical details first and come to the practical answer for your exact case later; separated from the theory by a horizontal rule.

Approaching the complex theoretically, our first observation is that we are going to have six atoms coordinating our $\ce{Fe^3+}$ centre. Six ligands means that we should consider an octahedric environment as initial approximation. For the next bit of the discussion, I am going to ignore the fact that two ligands each belong to the same molecule and treat them all as $\ce{O^{\frac{1}{2}-}}$ or maybe as $\ce{OH-}$ since the latter is close enough.

The crystal field theory, our first approximation, considers these ligands to be point-shaped negative charges that approach an $\ce{Fe^3+}$ ion. The lonely iron(III) in vacuum will have five d-orbitals of degenerate energy; the approaching negative charges will destabilise all those orbitals that point towards them — for simplicity, let us assume that the corners of the octahedron are the axes of a coordinate system, and thus the destabilised orbitals are $\ce{d}_{x^2 - y^2}$ and $\ce{d}_{z^2}$. (The other orbitals point between the ligands and are therefore unaffected.) This will give rise to the most basic of all transition metal complex energy diagrams as shown in figure 1.

Figure 1: splitting of d-orbitals in an octahedral complex according to crystal field theory. The energy difference always corresponds to $10~\mathrm{Dq}$

Crystal field theory, unfortunately, gives us no information about the energy difference between the two sets of d-orbitals — this is important, since we need a significant energy difference if we want to keep our electrons paired at a lower level. Figure 1 chose to keep a high-spin complex simply for spin retaining. Therefore, the again most simplistic approach to analyse different octahedral complexes by their actual energy differences (remember that $10~\mathrm{Dq}$ or $\Delta$ is only a variable) is to assume a certain contribution both from the metal’s side and from the ligands’ side:

However, if you put more research into this phenomenon, it quickly becomes highly dissatisfying. The approximation for $10~\mathrm{Dq}$ up there is no real good, because the same ligand has different $f_\mathrm{L}$ values for different complexes — and even worse, the same metal-ligand combination can sometimes be found in both high- and low-spin states resulting in wildly different values for $10~\mathrm{Dq}$: For high-spin $\ce{[Fe(ptz)6]^2+}$, $10~\mathrm{Dq} = 1.23 \times 10^4~\mathrm{cm^{-1}}$ while for low-spin $\ce{[Fe(ptz)6]^2+}$, $10~\mathrm{Dq} = 2.00 \times 10^4~\mathrm{cm^{-1}}$. And whenever simple approximations don’t adequately explain the true picture, we need to resort to molecular orbital theory.

The simplest approximation in molecular orbital theory gives a similar picture as crystal field theory does: We have a set of six s-type orbitals approaching our metal ion, and these six orbitals will form σ-bonds with the metal. The main difference is that we can better explain why the metal orbitals will split: The ligand orbitals transform as $\mathrm{a_{1g} + t_{1u} + e_g}$ which means that they will interact with the metal $\mathrm{e_g}$ orbitals. Since the ligands are typically lower in energy, we realise that what we are in fact observing are antibonding $\mathrm{e_g^*}$ orbitals on the metal. Thus, electrons in these orbitals should weaken the metal-ligand bond (order); or complexes lacking electrons in $\mathrm{e_g^*}$ should have a shorter metal-ligand distance. However, this approach is also unsatisfactory: negatively charged ligands such as $\ce{OH-}$ or $\ce{acac-}$ should have donor orbitals of higher energy, meaning more similar to those of the metal, meaning a greater splitting – which we do not observe.

Now to get back to high-spin versus low-spin. Remember that it is not favourable per se to pair electrons — when applying the aufbau principle, you must never forget Hund’s rule which tells you to fill orbitals of the same energy with parallel spins first before adding the first antiparallel spin/pairing the first electron. In certain cases such as chromium, it is even favourable to have $\mathrm{3d^5 4s^1}$ — all valence spins unpaired. This is no different when going from elements to compounds: A certain energy gain is always required to make electron pairing favourable. Oftentimes, this energy gain is simply not supplied as is the case for most $\mathrm{3d}$ transition metal complexes that are not $\ce{d^8}$. The high-spin iron(III) complexes are the rule, not the exception, for the $\mathrm{3d}$ metals.

To raise the energy difference, we need strong-field ligands. The above paragraphs tell us what they need to: σ-bonding must be strong to raise the energy of $\mathrm{e_g^*}$ while π-bonding (if present at all) must be weak to not raise the $\mathrm{t_{2g}}$ level. Cyanide is good at doing this because its σ-donor orbital has roughly the same energy as the metal, so the bonding will be largely covalent with a large difference.

If, by the way, we accidentally manage to turn a high-spin into a low-spin centre, as was highlighted above with the ptz-ligand, a number of follow-up changes will also occur: Since the $\mathrm{e_g^*}$ orbitals are no longer occupied, the ligand to metal bond order increases and the ligands come closer to the metal. Therefore again the energy difference will rise because the covalent bond will be strengthend. This is the reason why the energy difference suddenly jumps from $\approx 1.3 \times 10^4~\mathrm{cm^{-1}}$ to $\approx 2.0 \times 10^4~\mathrm{cm^{-1}}$ when transitioning between high- and low-spin states.

In the case of the $\ce{acac-}$ ligand, for starters we need to realise that oxygen (the donating atom) is rather electronegative and thus we can assume its orbitals to be rather low-lying energetically. Low σ-donor orbitals means less destabilising of $\mathrm{e_g^*}$ and therefore a lower field split.

Secondly, we always have p-type orbitals on oxygen that do not participate in the π-system so that they can π-bond to the metal, too — or it could even be the π-system itself bonding to the metal. In any case, $\mathrm{t_{2g}}$ will be split and the metal component, $\mathrm{t_{2g}^*}$ will be raised in energy. This further reduces the field splitting, altogether putting $\ce{acac-}$ into the weak field department.

Finally, even though we have iron(III) and even though higher oxidation states are generally more prone to give low-spin complexes, iron(III) is not one of them. It takes significantly stronger ligands than water or even ammonia to generate low-spin iron(III) complexes, so generally any anionic oxygen-donor will not be enough to overcome the pairing energy.

Acknowledgement:
Most of the knowledge is taken from Prof. Klüfers’ lectures on coordination chemistry and refreshed by checking his course’s internet scriptum.

Briefly for weak ligand, low splitting of the orbital occurred. For low splitting high spin state occurs, in which the electrons can fill all the states sequentially starting from the ground states to excited states individually.

3
Hybridisation of complex compound having octahedral geometry
9
In an octahedral complex, what happens to the electrons donated by the ligand?
4
Is [Co(NH₃)₄Cl₂]Cl paramagnetic or diamagnetic?
1
About Fe(III) and Fe(II) coordination complexes
4
Geometry of Ni(acac)2
3
What is the magnetic moment of tris(oxalato)nickelate(IV)?
0
Do "weak-field" and "high spin" complexes refer to the same thing?