What is the enol form of 4-methylcyclohex-2-en-1-one?

What is the enol form of this compound?

I have made an attempt, but it doesn't look quite right. 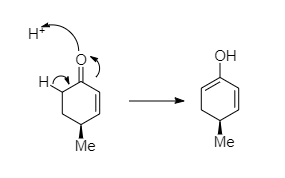 Which hydrogen should be taken off (left or right hand side of the carbonyl)? And I don't think the ring is aromatic so I don't know how it is stabilized.

organic-chemistry tautomer
Share
Improve this question
edited May 17 at 7:08

Also which hydrogen should be taken off (left or right hand side of the carbonyl)? And i dont think the ring is aromatic so i dont know how it is stabilized...

When creating an enol the hydrogen alpha relative to the carbonyl is generally ionized. The alpha hydrogens are somewhat more acidic than the other hydrogens because of the possibility for resonance withdrawal of electron density by the carbonyl oxygen.

The ring is conjugated, but not fully conjugated, so the ring isn't aromatic. But partial conjugation is stabilizing.

There are two possible enol forms of this ketone. The first one is: 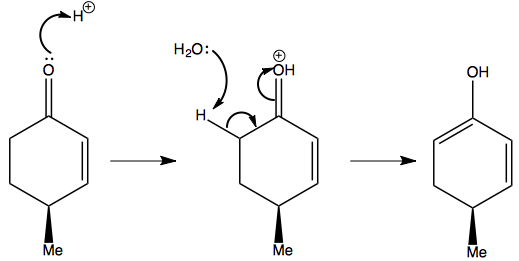 This is the one you drew, which shows the α hydrogen being abstracted. It is perfectly valid.

The other one is: 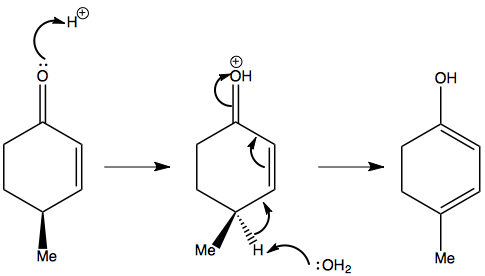 Note that in this enol form, the methyl substituent is now in the same plane as the C=C next to it. This means that, if you were to reverse the tautomerisation to get back the keto form, there's an equal chance of the hydrogen coming in from above the plane and from below the plane, and racemisation would occur. In practice, there is a rapid equilibrium between keto and enol forms, and this means that if you were to dissolve this compound in any kind of acid (or base), the racemisation would occur pretty quickly.

At this stage, you might wonder why we cannot abstract the other α hydrogen. There's a couple of reasons. Firstly, it's attached to a $\mathrm{sp^2}$ carbon, and the C-H bond is therefore somewhat stronger. Secondly, even if you could take off that proton and form the "enol", you would have two double bonds next to each other. That's a huge problem because those double bonds want to be linear, but don't quite have the space to do so since there's a ring: 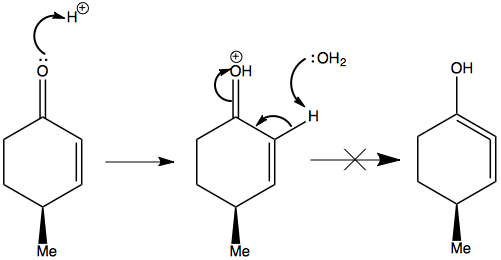 Regarding the stability of the two legitimate enol forms, I would not say that they are any more stable than the keto form. In general, the keto form is more stable. There are cases in which the enol form is relatively stabilised, most often when there is aromaticity or extra conjugation in the enol form (other factors such as solvent will also influence the position of equilibrium): 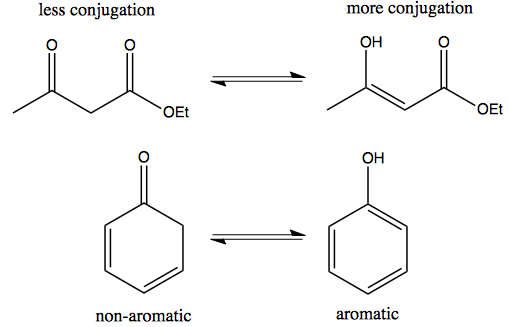 However, that is not the case here. The starting keto form is as conjugated as any enol you can form.

yes your answer is right. this is more stable as it is a conjugated diene. but, initially the H+ attacks on the lone pair of =O then the oxygen takes up the pie bond to neutralize the formal + charge on it.

4
Dependence of steric hinderance on enol content
22
Is carbonyl-enol tautomerization only intermolecular or can it be intramolecular?
8
Why is the thione tautomeric form of 2-Mercaptopyridine favoured?
3
Enol or Keto form?
8
What is the driving force for imine formation?
2
Structure of the compound C9H7O2Cl?
3
Which has the highest enol content?