What would be the state of water in interstellar space or vaccum?

Consider the interstellar space: Far from radiations, heat, etc. You can imagine conditions equal to vacuum. At these conditions, what will be the state of water; Ice, liquid, vapours, or something else?

What I know is that in lab conditions in a vacuum flask if we do the same experiment with water: First it starts to boil, as the pressure in vacuum is almost zero. As it takes no time for the water to reach pressure equal to surrounding pressure, vapour pressure is formed easily. Water starts to boil without any rise in temperature. Second, since energy is spent in boiling all the kinetic energy is used up and the water molecules start to condense forming ice.

The question now is: What are the differences between lab conditions and interstellar space? Shouldn't the results be all the same?

Let's have a look at the phase diagram of water: 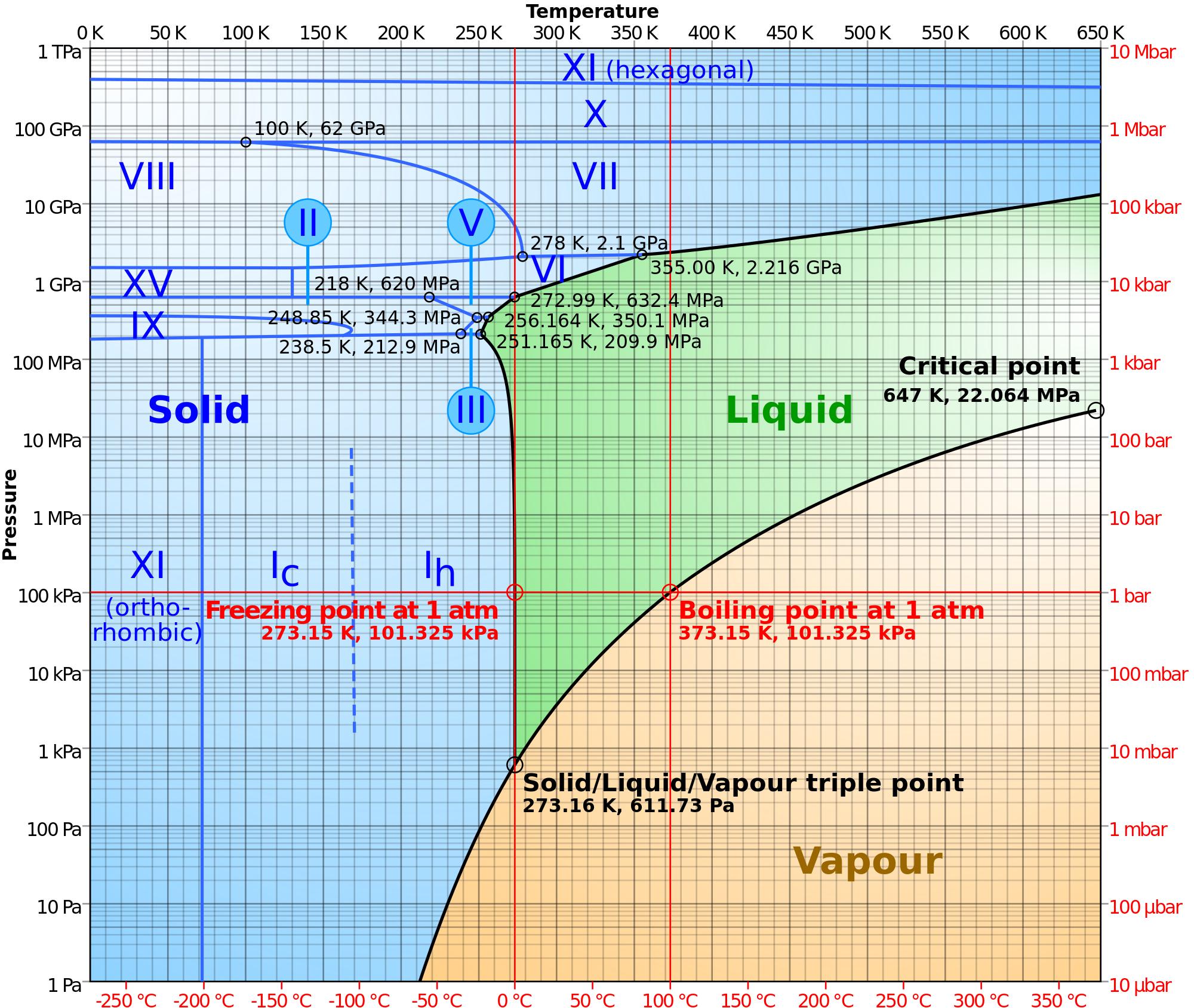 In space, both the temperature and pressure are very low. That would put beyond the bottom left corner of the diagram, well within the ice field. So simply speaking, water would be ice.

However, there is the concept of vapour pressure. Any condensed material (just a fancy word for both solids and liquids) has that same material in the vapour around it. That's why you can smell alcohol, even though it's liquid as one example. That's why a puddle of water will eventually dry out even though it's below the boiling point of water.

The way vapour pressure works is that if you look on the phase diagram, for a certain temperature, the liquid-vapour and the solid-vapour lines have certain pressures associated with them. For example, if you look on 50 C, then the pressure on the curve is 10 kPa. Roughly speaking, this means that in atmospheric pressure, one tenth of the air (which is at 100 kPa) has to be water vapour. If it's any less, water will keep evaporating until it reaches that amount. On Earth, wind and diffusion will disperse the water so it will basically evaporate until there are no more liquid water left.

Now let's think what would happen in space. The temperature is very low, so the vapour pressure is very low. Thus, it should evaporate also in space. However, because the vapour pressures at such low temperatures are extremely low, you might end up with a situation where the gravitation of that ice blob is enough to overcome evaporation, so that will be an agonizingly slow process.

If you are talking about pure (i.e. distilled) water, then the majority of it will most likely evaporate due to the low pressure /see e.g. this video about how water behaves at microscopic level and how raindrops form - about raindrops/. However, if the water is not pure and has some dust particles within it, then these impurifications may "be able to" act as bases for formation of droplets. Thus, I guess there would be some visible snowflakes / ice-balls formed due to the low temperature (despite the low pressure)... In any case, whatever forms, it will be more or less spherically symmetric due to the lack of gravity.

4
Water-water vapour equilibrium above the boiling point
6
Kinetics of interstellar chemistry: Applying steady state to formation of H₂
2
Evaporation of water
2
How accurate would be the following conclusion on 'Critical Temperature'?
3
Pressure Cooker at High Altitudes and Low Altitudes
1
Comparison of evaporation rate of liquids
4
Will addition of inert gas change the vapour pressure of a liquid?