How is a molecular orbital a 'quantum superposition' of the atomic orbitals?

Let me quote from Feynman's lectures the concept of superposition:

The second point is the core of quantum superposition.

Also, in Dirac's language from The principles of Quantum Mechanics,

[...]It requires us to assume that between these states there exists peculiar relationships such that whenever the system is definitely in one state we can consider it as being partly in each of two or more other states.[...]

For instance, let's take $\ce{H_2^+}$ to illustrate the concept of superposition. Firstly, the words of Feynman:

A positively ionized hydrogen molecule consists of two protons with one electron worming its way around them. If the two protons are very far apart, what states would we expect for this system? The answer is pretty clear: The electron will stay close to one proton and form a hydrogen atom in its lowest state, and the other proton will remain alone as a positive ion. So, if the two protons are far apart, we can visualize one physical state in which the electron is “attached” to one of the protons. There is, clearly, another state symmetric to that one in which the electron is near the other proton, and the first proton is the one that is an ion. We will take these two as our base states, and we’ll call them $|1⟩$ and $|2⟩.$ They are sketched in Fig. 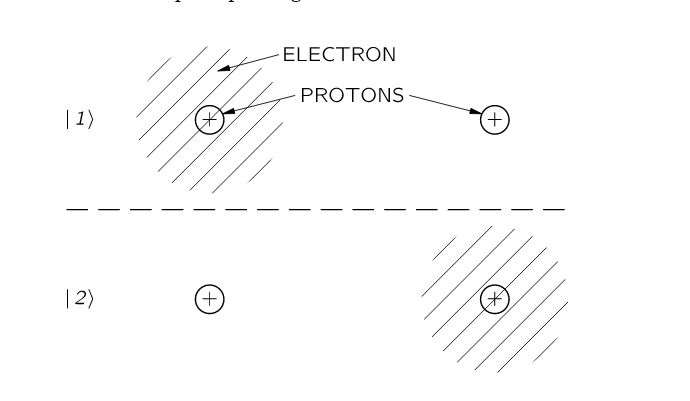 Now using the point no.(2) of Feynman, we can prove the superposition of the states as :

What should be the amplitude for finding the electron in, say, $x'$ from the center of the molecule $\ce{H_2^+}?$ (We would use each-coordinate as our new base-state, that is, $|x\rangle$ is a base-state; this means we would now treat continuum of base states).

Come to the MO description of $\ce{H_2}$(only the bonding orbital is concerned here to shorten the query). This is where my problem begins...

This is quoted from J.D.Lee's Concise Inorganic Chemistry:

Now, wavefunctions are nothing but probability amplitudes; since _molecular orbital is a quantum superposition of the atomic orbitals; it must satisfy the point no.(2) like all other superposition described above.

In the question about resonance we've already faced a situation when we could only formally think about a linear combination as a superposition of some imaginary states. Same story here: molecular orbitals are just linear combination of atomic orbitals. As for the case of resonance, the states you think are superimposed (atomic orbitals this time) are not even states of electrons in a molecule. The only "real" (though approximate) states of electrons in a molecule are molecular orbitals, not the atomic one, thus, strictly speaking, there is no superposition out there.

P.S. And to be honest, I don't understand what you did for one-electron $\ce{H2+}$ case as well. To me it looks like you have too many misconceptions in your head currently. I suspect, you're jumping the gun by trying to learn the applications of quantum mechanics to chemistry having no really solid background in theory itself.

Anyway, that would be the thing I at least understand. But look what you did! A complete mess! First, you forget the coefficients in the linear combination. Secondly, you used the resolution of identity for absolutely no reason. Thirdly, normalisation constant just appeared out of the blue. Finally, what you think you get at the end is in fact the starting point of a journey: it is an assertion Feynman did.

So, for me all you algebra appears as random manipulations of symbols you've seen somewhere but don't really understand.

8
Trying to understand the statement: 'Resonance is not a flickering between the contributing states. '

2
How to prove that the orientation of the atomic orbitals in the superposition $\psi= a\psi_{1} + b\psi_{2}$depends on the coefficients $a$ & $b$?
8
Trying to understand the statement: 'Resonance is not a flickering between the contributing states. '
5
Demonstrating orthonormality for wave functions for ground state and excited state of He
5
How are the LCAO ansatz and Slater determinant ansatz for the wavefunction connected?
5
What determines the coefficients in the wavefunction of a hybrid orbital?
2
Effective Bohr Radius in Transition Metal Complexes?
3
Quantum chemistry Python package to solve the Coupled-Perturbed Hartree–Fock equations
3
In the LCAO method for $H_2^+$, why do we only add or subtract orbitals but never alter one of the phases of the orbitals?