Consider a sample of gas in a fixed volume container . From the arguments of Kinetic Theory of Gases on quadrupling the temperature what will be the effect on pressure .

Basically I thought that the answer should be that the pressure gets doubled . But the answer is that it gets quadrupled . Can anyone explain how ??

physical-chemistry gas-laws kinetic-theory-of-gases
Share
Improve this question
edited May 22 at 21:00 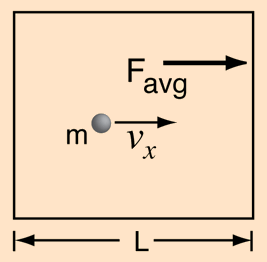 Consider the following diagram of a particle. Now under the assumptions from kinetic theory, the average force on the walls of the container is given by: $$F_{average} = \frac{mNv^2_x}{L}$$ Now assuming that the speed of the particle is random in all directions we get: $$v^2 = v^2_x + v^2_y + v^2_z = 3v^2_x$$ Now pressure is defined as the average force acting on a surface area of $\mathrm{1m^2}$. Therefore the pressure is: $$p = \frac{F_{avg}}{A} = \frac{mNv^2}{3LA} = \frac{mNv^2}{3V} = \frac{2N}{3V}\frac{1}{2}mv^2$$ So we can see that the pressure on the wall is directly proportional to $1/2mv^2$. This relates to the total kinetic energy of the particle. Temperature is defined as the average kinetic energy of a particle, hence $1/2mv^2$ is directly proportional to temperature. Therefore a two fold increase in temperature will result in a two fold increase in kinetic energy which will result in a four two increase in pressure.

Not the answer you're looking for? Browse other questions tagged physical-chemistry gas-laws kinetic-theory-of-gases or ask your own question.

3
Volume of different gas in a container
5
Why is the ideal gas law so ubiquitous?
1
How would Dalton's law be affected when there are two ideal gases in a container at different temperatures?
0
Boyle's law applied on mixture of gases
5
How does the partial pressure of gas C change with the change in volume of the container?
2
If a gas always occupies the volume of its container, will its volume always be 22.4L at STP?