How is this sugar classified as an aldose?

I have made the following image in paint, so forgive me if it isn't the most appealing sugar. I have a hard time visualizing how the following sugar is an aldose. 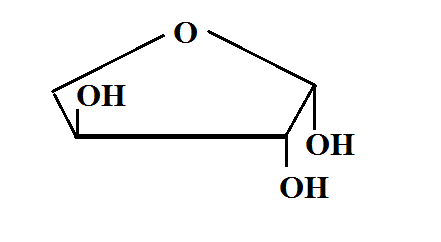 My speculation for the Fischer projection of the alleged carbohydrate is: 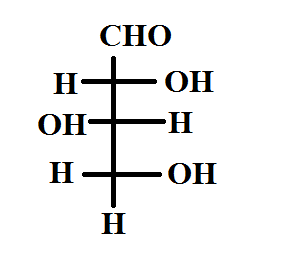 My speculation is as a result of the lack of primary alcohol at the end of traditional carbohydrates like D-glucose for example means that there is not carbon group alpha or beta to carbon 4 in the furanose ring. The fact that there is still a CHO group on Carbon 1 would make this sugar an aldose? Is this logic correct, and is that the Fischer projection for the sugar shown above in the Haworth projection?

Yes its an aldose it is classified as an aldose because of the aldehyde group (cho). The compound is actually an aldotetrose called L-Threose. Try using acd Chem sketch program for the projection it is a free download for the freeware version...

Not the answer you're looking for? Browse other questions tagged organic-chemistry carbohydrates or ask your own question.

1
How To Obtain A Reducing Sugar At Home?
2
What is a sugar?
6
Carbohydrate configurations
7
Stability of furanose vs. pyranose form of glucose?
5
Determination of (R) and (S) configurations from a Haworth projection
0
How to select for 1-4 carbon sugar bond in Chemical Glycosylation?
1
Reducing sugar among the given compounds
9
Identifying the D/L form of any aldose or ketose in cyclic form
1
Nomenclature of carbohydrates
0
what is a sugar unit?