Why is the inversion barrier larger in PH3 than it is in NH3?

Ammonia is the classic system for $\ce{sp^3}$ hybridisation save methane. The lone pair (and each of the $\unicode[Times]{x3C3}$-bonds) has almost $25~\%$ s-character which corresponds nicely to $\ce{sp^3}$. However, the whole system can also swing around, changing its hybridisation to $\ce{sp^2}$ and back; a process during which the lone pair is temporarily in a p-type orbital and the s-character of the bonding orbitals increases.

Elements outside of the second period show a much smaller tendency to involve the s-orbital in bonding. The bonding orbitals only have an s-character of approximately $16~\%$. This also means that the phosphorous lone pair has a much higher s-character of approximately $50~\%$, while the bonding $\unicode[Times]{x3C3}$-orbitals have a larger p-character. (This also explains the much smaller $\ce{H-P-H}$ bonding angle of approximately $90^\circ$.) An orbital of high s-character has a long way to go to turn into a p-type orbital, and the three largely p-type $\unicode[Times]{x3C3}$-orbitals have an equally long way to go to give $\ce{sp^2}$-type orbitals so the interconversion and thereby the inversion of $\ce{PH3}$ is strongly hindered.

Disclaimer: This answer neglects quantum tunnelling effects, which are significant in such compounds. The gist of it is that because nitrogen is smaller and lighter than phosphorus, the rate of tunnelling and hence inversion of chirality is much faster. This issue is discussed to some extent in this question.

I've attached a Walsh diagram for the $D_\mathrm{3h} \leftrightarrow C_\mathrm{3v}$ transition below, which corresponds to pyramidalisation of a planar structure. (Image taken from Orbital Interactions in Chemistry by Albright, Burdett & Whangbo, 3rd ed., p 186.) 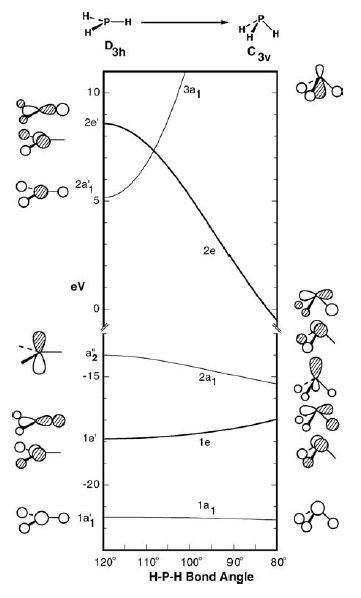 Now, in order for inversion of stereochemistry to occur at N or P, the molecule has to go from a pyramidal structure, through a planar transition state, and back to the other pyramidal structure. It is kind of like flipping an umbrella inside out! The energy barrier to inversion is, of course, the difference between the equilibrium geometry (pyramidal) and the transition state (planar).

Now, $\ce{NH3}$ and $\ce{PH3}$ are both 8 valence electron species. This means that the HOMO will be the $2a_1$ orbital in $C_\mathrm{3v}$ symmetry, which becomes the $\mathrm{a_2''}$ orbital in $D_\mathrm{3h}$ symmetry. As you can see, due to a loss of bonding interactions of the central $\mathrm{p}_z$ orbital with the hydrogens, the HOMO is destabilised upon planarisation.

Now, let's assume that the HOMO is the predominant orbital that determines the inversion barrier. That's quite usual in discussion of Walsh diagrams. This means that the steeper the $\mathrm{2a_1} \rightarrow \mathrm{a_2''}$ slope, the harder it is for planarisation to occur, and the larger the inversion barrier.

The question therefore becomes: how much is the $\mathrm{2a_1}$ orbital stabilised upon pyramidalisation? If it is stabilised more, then planarisation is harder and the inversion barrier is larger.

It turns out that the stabilisation of the $\mathrm{2a_1}$ orbital can be seen as a second-order Jahn-Teller distortion. This means that, in going from $D_\mathrm{3h}$ to $C_\mathrm{3v}$, there is a loss of molecular symmetry that causes two orbitals that originally do not have the same symmetry to become the same symmetry. In this case, the two orbitals are the HOMO and the LUMO:

It turns out that the strength of the Jahn-Teller effect is inversely proportional to the difference in energy between the two unmixed orbitals. The idea is that orbitals close in energy interact more strongly with each other - and that should be a somewhat familiar idea, because it is a central principle of MO theory. Anyway, it means that if the HOMO-LUMO gap in $D_\mathrm{3h}$ is small, there will be a large stabilisation of the HOMO upon pyramidalisation, and hence a large inversion barrier.

Finally, we have come to the last part of the explanation.

There is a little bit more discussion in the aforementioned textbook: Orbital Interactions in Chemistry, 3rd ed. pp 187-9.

Your question deals more with hybridization. First we have to note that $\ce{NH3}$ has a lot more hybridization than the other molecules with hydrogen of the group e.g. $\ce{PH3}$. This means for example that $\ce{PH3}$ and $\ce{AsH3}$ have bonding angles near 90°. Because the tetraedric angle needs a $sp^3$ hybridization.

The transition state of the inversion can be stabilized by a $sp^2$ hybridization which again practically happens only for the ammoniak.

Not the answer you're looking for? Browse other questions tagged inorganic-chemistry stereochemistry molecular-orbital-theory molecular-structure chirality or ask your own question.

3
Chirality of heteroatoms
37
Why is the bond angle H-P-H smaller than H-N-H?
23
Can heteroatoms with lone pairs be chiral centres?
22
What is the mathematical basis behind the Jahn-Teller effect?
13
Hybridization of nitrogen in trisilylamine, (SiH3)3N?
22
Why don't trigonal S and P compounds undergo inversion at room temperature?
16
Diagonal relationships in the Periodic Table
8
Why can't ligands with “locked structures” undergo chelation?
3
Why sp3 hybridisation in NH3 but bonding with pure p orbitals in case of other hydrides of group 15
2
Does triphenylphosphine show resonance?
See more linked questions

22
Why don't trigonal S and P compounds undergo inversion at room temperature?
0
Why does the PH3 geometry deviate more from the trigonal planar one, than does NH3?
5
Assigning absolute configuration when determining crystal structure isn't possible
3
Why do PBr3 and PCl3 have larger bond angles than PH3?
1
Example of an achiral molecule without a plane of symmetry or inversion center?